currently reading... or: on identity and categories 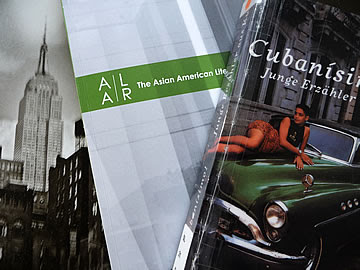 "Cubanísimo" - a german paperback collection that features 25 young storytellers from Cuba. all are born after the revolution in 1959. the introduction is also sketches Cuban's current geo-social state in a nutshell: a population that consists of 1) the ones living in Cuba, 2) the ones living in economical exile, but are able to visit Cuba, and 3) the ones living in political exile. the author bio section is a story in itself: born in Havanna, currently living in .. Paris / Rome / New York.

2 things i hadn't expected: all stories were written in spanish, then translated to german (even those from authors living in Europe/America). and: the collection is sorted by the birth year of the authors (which reflects the political development of Cuba).

the first story i read was from Mylene Fernandez Pintado, it's about the dream to go to New York, and all the hopes / ideals attached to this city - and the worry of diminishing those hopes when arriving there. "Und wenn ich wirklich reise?" - "And if I would go there for real?"
a bit more on Cuban literature: wiki/Cuban literature

which, of course, leads to the question of author identity, especially in relation to ethnic-/socio- /geographic coordinates- a theme that also developed these days from 3 other angle:
- the New Yorker feature on "40 under 20", the focus on first glance here is on age, but there are also some interesting gender/ethnical aspects included in their choice: NY summer fiction issue / 2nd language authors.
- the second angle is qarrtsiluni's "The Crowd" issue, which lead to a dialogue with a friend about crowd identity/individual identity.
- and then there is the whole category-issue of Daily s-Press itself: initially, i had planned to include social and geographic tags (gender / age /ethnicity / geographical location) - but then realized that this would a) be a whole complex topic itself, and b) enhance the tendency to categorize authors, while the focus of Daily s-Press is on the books and the themes they point at.

coming from this, it was more than interesting to read those 2 statements:
- "I think nothing is more annihilating to a writer than to be celebrated for what he or she is and not for what he or she wrote." - Alexander Chee
- "We are what we write. It is not a political description, but rather a psychological marker of what preoccupies us. Yes, our work ought to be celebrated for its intrinsic beauty /relevance, but the particularity of its consequence is rooted fimly in our individual psyche." - Ru Freeman

this forum is followed by a section of poetry, an interview, a section of stories. 3 book reviews set the ending point, with each author speaking in an own, particular voice. i could start quoting, but wouldn't know where to begin or to end.

yet there is one story, "Compartment Comportment" by Maire Mutsuki Mockett that i would like to point out - it picks up the theme of identity as part of the story, and sketches the difference between the Japanese and the American take on individuality:

“In the west, it always seems so important for us to signal on the outside how we believe we exist on the inside. Hence the trend for piercings and tattoos, a political stance against Starbucks, bumper stickers—anything that can give the casual viewer a sense of just how unique you believe your soul to be. The friends you make will probably share these external habits. There are times when I find this constant advertising to be not only glib, but exhausting. Does it really get at anything essential?
In Japan, to paraphrase a friend of mine, it’s the opposite, but not exactly how you think.”

the story from Marie Mutsuki is also online in Discover Nikkei -a forum for Japanese Migrants and their Descendants: Compartment Comportment

ane here, a bit more on Asian-American literature: resources. also, there is an essay by Amy Ling: "Teaching Asian American Literature" with this wonderful sentence and following list of questions: "There is always a surplus of humanness, as Bakhtin says, (Dialogic Imagination, 37) and several questions tease us as we try to put people into categories."

there is more to say on all this, also from my perspective of a german female author writing in english, but for tody, i leave it at that, and take those 2 paperbacks outside, to spent some more time with those stories from different origins.