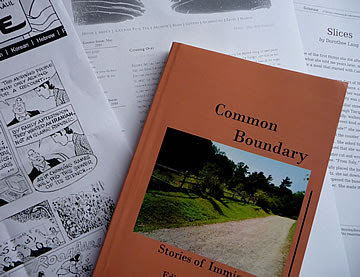 "Common Boundary - Stories of Immigration". this book is a gem. there is a daily s-press feature up on it (Common Boundary), the description says: "These stories might be timely because of what you read in the newspaper, but these stories are timeless since they continually intrigue us, constantly pull us back to take another look at origins and major questions."

and they are. it's one of the strongest anthologies i have read this year, and almost each story included moved me. there's something deeply human about them. here's a note from the foreword: "These stories of immigration are about people who mentally and emotionally live between places, languages and cultures. And, really, aren't we all a jumble of perspectives? Aren't we all living somewhere between our dreams and our reality, between our fears and our desires, between our various identities?" - Jason Dubow
reading and typing this now, it's no suprise to find the word again here: identity. and of course, the state of living between languages speaks to me directly, as a german / english writer.

the stories included in "Common Boundary" reach from Mexico and Beirut to South Africa, Serbia and Iran, their centre point as place of immigration is the USA. in their own way, they connect thematically and geographically to other stories i read recently, like the Cuba story collection, or the one from South Africa - so many places where people live in circumstances that makes them leave their home, and step into the insecurity of being an immigrant. one story that especially moved me was the one from an Iranian author, "Being a Foreigner" by Azarin A. Sadegh. the story starts with this line: "The day I left Iran for good in 1983, I had no idea what living as a foreigner might mean. Now I do."

this story also brought me back to Zahra's Paradise, the web comic created by an Iranian author and artist in exile.

also, i am reading the new issue of Cha - and found a story there that would fit into anthology. it's written by Gwen Florio, a journalist who worked in Afghanistan and Pakistan. the story title is "Crossing Over" - it's the story of Rahima, an Indian woman who is brought to Afghanistan by her new husband, just some days after 9/11. (caution: this story might be upsetting to read for some.)

looking at those stories i read now, it seems they also might have influenced my own writing, from theme and approach. for example, the flash story i wrote about Berlin, "Slices" (see the note below) - like the stories in Common Boundary, it's a personal take on a larger theme. i hadn't thought of this while writing it, though.
.
Posted by Dorothee at 10:02 AM