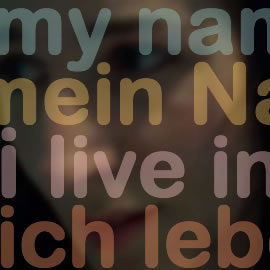 Author Mercedes Yardley is running an interesting author-series in her blog "Broken Laptop", induced by a conversation: "We were talking about online personas and how we want our authors and artists to be informative, approachable, and yet mysterious. Natalie commented that writers should all wear masks. And that sparked my muse: We all wear masks.

The spotlight series is named: "Writers in Masks”. It got me thinking. And writing. Here's my mask:

My mask is invisible.

I wear it almost every day, usually without thinking of it. It is: English.

I started to learn English in school, in the fifth grade, as most German pupils do. About the same time, my father bought a computer. He didn’t use it much, and so I adopted it. That was long before Windows, when you needed to learn a computer language to communicate with the processor. So I learned Basic. Learned it faster than I learned English in school. Started to write some simple programs, then moved to the next level. And at some point, asked my father to buy computer magazines. Some of the computer magazines were in English. I can’t remember the exact timeline, but I guess it was a two-way process: the English in school helped to get me into Basic, and the computer zines were like extra lessons in English.

In seventh grade, the French lessons started, but I never really got the hang of this language of accents and apostrophes: “Qu’est-ce que c’est ?”- “Cest ça, la vie.”

Altogether, I didn’t think much about the nature of language itself back then. Words, as I understood it, were strings of meanings, and could be changed from one language to the other with the help of a dictionary. I knew there were programmers who were busy programming language modules for computers. Not long, experts said, and the computers would start to talk, and would be able to translate texts.

In school, the English lessons continued, and we started to read books. That’s when I ventured into the “foreign” rooms of the library. Sometimes I was lucky, and they had a book in both editions, German and English. Then I would borrow both, and have the German as back-up for difficult passages. Reading a book in the original version and in the translation also opened my eyes for the fact that a translated texts is a transformed texts. I still have vivid memories of reading Toni Morrison’s book "Sula" in German, and then in English. It was a different book.

Back then, I only wrote in German. Then I started to travel. And English became part of my everyday life. While abroad, I talked in English, and back home, I mailed in English, browsed English webpages. At one point, I started to write in English. Every now and then, I take one of my own texts, and translate it. It always reminds me of the pitfalls of translations.

Here’s an example, a nano story I wrote this year:

“He sat to watch the world go by. He waited for insights. Instead he found himself, thinking more and more about less and less.”

It took several approaches to turn it into German, starting from a literal translation and then moving to one that had a smooth flow of sentence and thoughts.

Looking at both lines now make me think again that every language has its own tune and melody. The question is: to which degree does this melody also influence the writer and the speaker? I sound different when I talk English. I put things different when I write German. Both stems from the language itself – which, like the computer language Basic, is an interface of communication. Only that this interface isn’t passive. Every language has a specific structure, vocabulary and tone. Maybe it’s no coincidence that there is “face” in interface. The languages we speak, to some degrees, are masks we wear:

notes:
- For some of my bilingual blog moments, try the label German
- And for more writers in masks, try this Writers in Masks link list
- This essay was first published in the Writers in Masks series, and now became part of the blog carnival >language >place
Posted by Dorothee at 5:36 PM