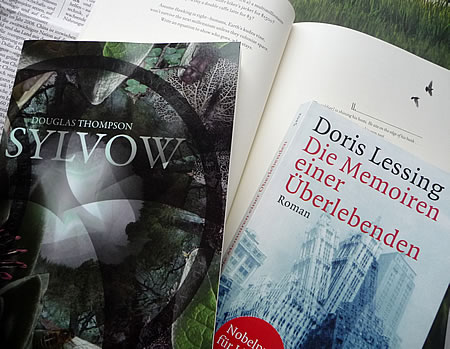 to enter the new year on an upbeat note, they showed 2012 in TV. "catastrophe spectacle" was the 2-word review that went with it: lots of action, mediocre storyline, amazing effects: popcorn armageddon. it seems christmas/new year is a favourite time for end-of-world films, there were several others up, too. 2012 is the end in fast forward: no time left to save the globe. the only hope for mankind are modern versions of Noah's Ark, built in China. the modern question to go with it: apart from animals, which persons to take, to provide a "starter set" for a new human society?

it's a question i came across yesterday again, in an unexpected place - the poetry collection of Christine Rhein, Wild Flight. here 2 selected stanzas of the poem that ends part 1 of the collection:

Story Problems
Stalin said, A single death is a tragedy, a million deaths
a statistic. Prove his theory using AIDS victims.
Solve for grief in Africa.

Assume Hawking is right - humans, Earth's kudzu vine,
won't survive the next millennium unless they colonize space.
Write an equation to show who goes, who stays.

connected to the environmental/future-of-world theme, i read 2 novels in the last weeks. one is Sylvow by Douglas Thompson. the novel merges magic realism, science fiction, a dream level, and some dark fantasy - the core of it: a semi-sentient natural world that is preparing to rebel against humanity's devastating effect on the environment. here's a bit:

Meanwhile, the million trees of the encircling forest, tired of breathing the discarded carbon out of the puny city in their midst, sighed and took their first breaths of oxygen like a rare cigar, and wondered whether to leave any for the humans in the morning.

"Sylvow" is from 2010. it takes a bit of time to get into the story with the many characters and levels of narrative, but it is a thought-provoking book, especially with the central image of the maze-like forest and the roots that grow underneath the surface of our civilization.

it was interesting to read Doris Lessing's novel from 1974 afterwards, "Die Memoiren einer Überlebenden" (Memoirs of a Survivor), which is set in a city where society has broken down. some people, like the narrator, remain in their flat, while others (especially the younger ones) gather, and go on trecks to the "North", in hope to find a better world there. like in Sylow, there is a metaphysical level included: a hidden world beyond the appartment walls that leads beyond the common dimensions. in real life, people try to pretend there still is normality, "das Spiel, das wir im allseitigen Einvernehmen spielen" - "the play that we play in common agreement."

back to the question of choice - who stays, who goes. on a different level, it appeared in a larger article on globalization, in this week's Zeit: "Das Welthemd" - "The world shirt". the article hooked the whole theme on a common H&M shirt, and followed it's monetary and production trail from scratch, and crossing from there to the larger dimension of current population and income level, including numbers i looked for before, but hadn't found: "Knapp 1,5 Milliarden Menschen, 20% der Weltbevölkerung,  verfügen über genügend Geld, um sich Kleider von H&M zu kaufen. Soziologen nennen sie: die globale Konsumentenklasse. Geschätzes Vermögen: 185 Billonen Dollar". - "About 1,5 billion people, 20% of the world population, have enough money to be able to buy at H&M. Sociologist call them: the global consumer class. Estimated wealth: 185 Trillion Dollar." [yes. to make things complicated, english billion=german milliarde, and english trillion=german billion]

and of course, the dream of the other 80% is to find the path to the "north". and at the same time, it's mostly the listed 20% of the world population that devastes the environment with all the consumer goods that are part of our common life. and it's interesting that we are also the ones who read the articles on globalization, and then go and enjoy the popcorn armageddon films in cinema, in a strange twist of human logic and joy.
Posted by Dorothee at 8:45 PM

Email ThisBlogThis!Share to TwitterShare to FacebookShare to Pinterest
Labels: bookshelf