this post belongs to the upcoming language/place blog carnival #16: "Translation (in all its forms), hosted by Steve Wing, which is now online: Translation Issue - Übersetzungsausgabe 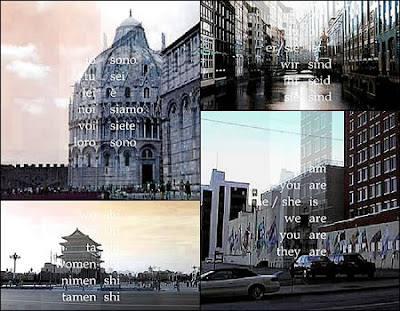 talking Italian
some years ago, i started to learn Italian. as it turned out, the most confusing thing about Italian was its closeness to French, which i learned in school, and which kept mingling with Italian in my mind.
in the end, i gave up on the Italian lessons, but the whole theme of languages and conjugates kept moving on in conversations, and at some point, in a play with words and places, and photos from different regions, with all those different shapes of houses, and those different conjugations of the basic verb: "i am / you are / she is...". which turns to "ich bin / du bist / sie ist.." in German, and "io sono / tu sei / lei è.." in Italian, i created a moving word installation: forms of being

from Italy to China
the installation later found its way into the qarrtsiluni Translation issue, which also lead to two conversations on language. the first with the Smitha, a friend of mine who at that point spent some time in China to learn Chinese. she wrote:

"I have never come across a language that frustrates and enthralls in equal measure. The sheer mountain of learning required just to converse is mind boggling. I can study Chinese for 3 years, and still not be able to read a Chinese newspaper or talk life philosophies with the Chinese. Sometimes, when I think of that I get discouraged. But I remind myself that is part of the reason I chose it. I could have learned Telugu or Tamil in a year. Those are languages closer to Sanskrit. Even European languages are easier with the root being Sanskrit. Remind me will you why I chose to torture myself?"

(the mail belongs to an ongoing conversation across continents, which eventually lead to our book that now soon will be released: "Worlds Apart")

China isn't China
the another conversation that developed was with Nick Admussen:
"There's some oddness about the pinyin stuff -- esp. "China yo shi yi dian ban zou"...I'm guessing you know that China isn't "China" in Chinese, but "Zhongguo", but you might not know that the "yo" is a typo for "you" which is the possessive verb ("yo" isn't a pinyin syllable). I also think that the only way to read and understand it is in context, both because of the pinyin and the kind of odd phrasing -- maybe you've misprinted "zou" for "zao" (early, morning). I would probably say "中国时间现在早上十一点半" "Zhongguo shijian xianzai zaoshang shiyi dian ban."

The verb 'declensions' are all right, except for the question mark after nimen in one iteration (which might also be intentional). If the Chinese characters above came through, you could email me and I'll give you the ones for "wo shi", etc.

Anyway, this is a very cool project!"
- Nick Admussen (more)


truth is, i hadn't known that. i just tried to find the original files, but it seems, they got lost, with only the extracted flash files remaining. so i keep the note here, as addition. which also adds another layer to the project: the complexity of language, and the difficulty of working with translations when you don't have a clue about the language itself. and the fact that blogger has problems in displaying the signs just shows another level of this complexity. here's a mail screenshot copy + paste:

and one more addition, following the note that China isn't "China" in Chinese, but "Zhongguo". it's the same for Germany. which isn't "Germany" in German, or "Allemagne", as the French say, but: "Deutschland". with "Deutsch" meaning "German", and "Land" meaning "country". which in fact was the key to founding "Deutschland", which was a mosaic of regions with one uniting element: the language.
Posted by Dorothee at 6:28 PM

right, Alemania! which then also connects to the "Alemannen" - the early German tribes. Mexico in German is just: Mexico. but Spain turns to: Spanien.

looking forward to this book!