the world in 7 books (or: mapping our world by continents)

Here are some world numbers and thoughts, sparked by the global reading challenge I am joining for this year. The idea: to read books from each continent of the world.

Which lead to a short continental detour in January:

Detour: Continents
The whole thing made me look for a world map by continents. it's a topic many books were written about, and you could probably create an own reading challenge about it. here's a summary: wiki/Continent. below, an image with the various ways to distinguish continents. (and here the whole post)

7 books later and continents by population
Last week, I completed book 7 of the challenge. So far I have "visited" the continents: Europe, Asia, North America, Africa. what's missing yet is: South America, Australasia, and a "seventh continent" (either Antarctica or an own seventh setting, f.e. the sea.)

I already have the books for the next continents waiting in the bookshelf. But the whole theme now made me go and and look at a world statistic: world population by contienents.

This isn't news: the world population is now in the range of 7 billion persons. and the continent with the largest population is Asia. what i didn't fully realize, though, is the proportions of the population in relation to continents. if you put Asia in one hand, and all the other continents in the other hand, Asia still would be largest: 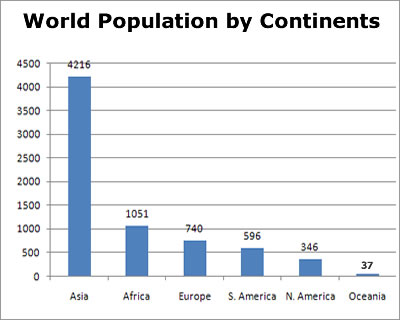 Here's the same statistic, only in a different type of chart: 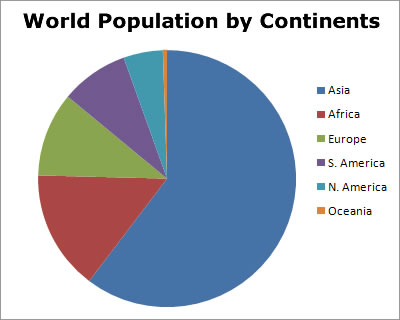 7 books
So looking at the world from this angle, if you want to read around the world in 7 books, you actually would have to go and look for 4 books from Asia and 1 book from Africa - and then for 2 anthologies that cover the rest of the world in their pages.

World Statistics: After arriving at this unexpected statistic, i explored this theme further in a second post, here: 1 million books published, 9 books read, and 25% non-readers: book figures from around the world

And if you are interested in world books: these are the world books i read so far: virtual world bookshelf