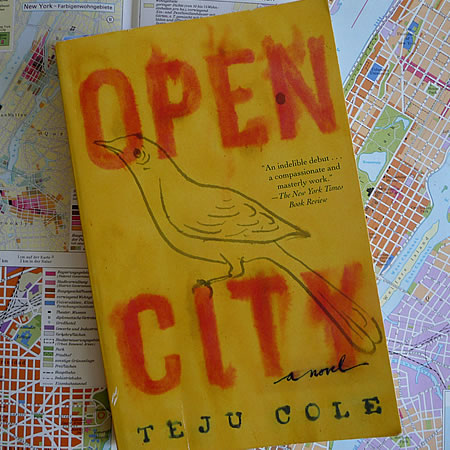 Open City - such a fine, different, thought-provoking book. here are some notes on it - usually I try to write one coherent blog post about the books i read, but that didn't really work for Open City. so this post is a combination of links, thoughts, notes, and two afterthoughts:

Open City is a book that moves through 3 continents (America, Europe, Africa), into the past and back, and touches all kinds of global and human themes - a lot of ponderings happens while the main character walks the streets of past-9/11 New York. It isn't the typical novel, it's more on the experimental side.

while reading it, i looked for interviews with Teju Cole on the book - turns out, he lists his own favourite interviews on his website: Interviews. and there are about 360 Open City reviews up on Goodreads, reaching from 1 star to 5 star.

Troubled Complacency
after finishing the book I browsed the interviews and reviews again, basically because the last 2 chapters of the novel bring an unexpected turn to the character's identity - a dark part of his past he has forgotten / blocked out, and that he doesn't comment, leaving the reader without a neat conclusion of storyline, meaning etc. which first made me try to retrace some of the scenes of the book in this different light, and then return to the interviews, and arrive at this line:

3:AM: The accusation that Moji makes against Julius: many critics have ignored it but it struck me as a huge moment that completely debunked my (perhaps complacent) understanding of the character. Is it ‘true’?

TC: Oh, it’s absolutely true. I can’t imagine Julius’ story without it. I knew right from the beginning the book would end like that: a three vicious thwacks of the hammer, and then a soft exit to strings. I’m attracted, in art, to things that trouble the complacency of the viewer or reader. I was interested in that move that went from “He’s one of us” to “Is he one of us?” Many people were upset that I put Julius through that. But there’s no such thing as a right to remain untroubled. (link)

while at Goodreads, i also saw that Open City was part of a "Book Tournament", and when following the book list and the link, i arrived at this book page i hadn't known of: The Morning News Tournament of Books, which is about the exact scene in Open City that got me looking for takes on it.

Open City
oh, and the title: "Open City". it sounds so open and inviting. while looking for the book on goodreads, i arrived at a second Open City book, which brought me to Rosselini's film: "Rome Open City". which then lead me to the wiki page with the definition of the term:

"Open City: In war, in the event of the imminent capture of a city, the government/military structure of the nation that controls the city will sometimes declare it an open city, thus announcing that they have abandoned all defensive efforts." - Wiki/OpenCity

Afterthoughts
the more i think of it, the stranger it feels that many critics ignored that key scene of accusation. it works like a second door to see things from a different, more provocative view: the main character, the one the reader learned to like and to sympathize (and maybe, in parts also identify with) in the first 80% of the book suddenly has a second face, a darker side.

taking this one step further, and picking up a theme of the novel: the difficulty to deal with tragedy, and to bring it to awareness. there is a scene that is about slave graves in New York - and how the pain and drama of this time, and of 9/11 hasn't been fully acknowledged yet. so the reaction to the dark side: the way the main character blocks the memory of it, and then the majority of critics don't pick it up either, but leave it unmentioned - while others are upset that the author puts the main character through this - maybe that is beyond the fictional /personal reaction also reflection on our collected way of dealing with unsettling themes.

also, the term open city: it actually is included in the book, in reference to the city of Brussels in 1940. it's part of a story there: "Had Brussel's rulers not not opted to declare it an opne city and thereby exempt it from bombardment during the Second World War.." - so i actually read the explanation of open city, but didn't make the connection to the words on the cover, at least not consciously (i guess the line still triggered something, otherwise i wouldn't have followed the "open city" link to Rosselini and to Wiki.)

it's one kaleidoscope of a book.

Darkness and light
to round this up, here's a quote that also connects to the theme of darkness and attention - it reads different now, after reaching the end of the book. (maybe i should read the whole book again, see how it reads now with the larger picture present. talk about life and the way we look at it defines the picture we are ready to see...)

"I knelt, and trailed my hand in the Hudson. It was frigid. Here we all were, ignoring that water, paying as little attention as possible to the pair of black eternities between which our little light intervened. Our debt, though, to that light: what of it? We owe ourselves our lives.
This, about which we physicians say so much to our patients, about which so little can be reasonably be said, folds back and also asks us questions."

Afterthought II
the line on ignoring the water. it now brought me back to the pages i read at the first of January. the T-shaped, thought-provoking commencement speach of David Foster Wallace - and there it is, attention again:
'"But if you really learn how to pay attention, then you will know there are other options.  ...  Not that that mystical stuff is necessarily true. The only thing that's capital-T True is that you get to decide how you're gonna try to see it."
(the full note, here: Truth, water, stone, and the direct essay link: This is water).

PS: thanks to Parmanu and Jean, it was Parmanu's blog entry on Open City and Jean's note on the book Open City opens here that made me go and list the book on my reading list.

Global + European Reading Challenge
In the read this year, i am taking part in a global and in an european reading challenge. the idea: to read books from each continent of the world / several countries of europe. here are the other books from the series: reading challenge
Posted by Dorothee at 10:11 PM

It is surprising to hear the meaning of the term "open city". I assumed it was less warlike too.

This is a very thorough and insightful review, it makes me curious about the book.