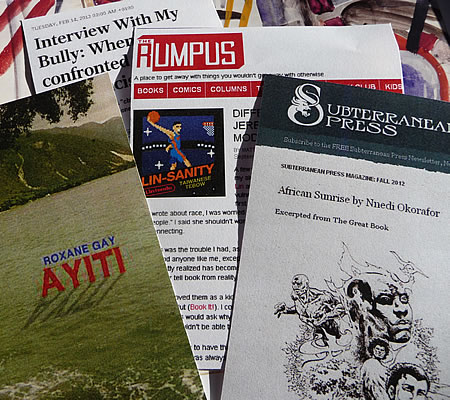 Around the world in 2 ways of voices
Currently i am reading books (and essays) for the global reading challenge i am joining this year. The challenge rules are simple: to read books from each continent. An aspect that i only noticed later: the guidelines don't address is the nationality of the authors. You can easily read around the world and still stick with authors that entirely belong to your own hemisphere. Which will make it a very different read (and world impression) compared to reading around the world in the voice of the authors of the different continents. That's a thought i kept returning to while reading "Ayiti" by Roxane Gay, and "African Sunrise" by Nnedi Okorafor.

"Every news story ever written will begin.."
Ayiti - Roxane Gay
I know Roxane from her essays, i think we even conversed in comments somewhere, but it wasn't until January 2010 that i realized her family is from Haiti. It was a day after ther disastrous earthquake when i followed the link to her blog note All Falls Down. Reading it moved me, especially with the outlook that now feels translucent and painfully turning to reality: "Late this evening, my mom and I were talking about how the before and after pictures of the slums looked mostly the same. That is the real tragedy of Haiti. When a natural disaster strikes the developed world, you know somehow, some way, that that place will rebuild. I am skeptical that Haiti will be able to recover from this disaster."

Until that point, Haiti was a place i only knew from the news until then. Later that year i read Roxane's story "Things I Know About Fairy Tales" (written before the quake). It tells about a common thread in Haiti: "Kidnapping is all anyone with any kind of money talks about in Haiti, everyone in a fragile frenzied state wondering when it will be their time. It was a relief, in a sense, to know that my time was up – to know that this day was the day I would be taken."

The story is also included in Roxane Gay's collection "Ayiti" - most of the stories in the collection are short, told from different angles, from male and female lifes, and together they form a mosaic that give a glimpse in Haitian society and life from the inside. And it was a longer passage in one of the stories that made me aware of the printed voices again, the inside and outside views, stereotypes and media simplifications. The story is about Nicaragua, which followed Haiti in being the poorest nation in the Western Hemisphere: 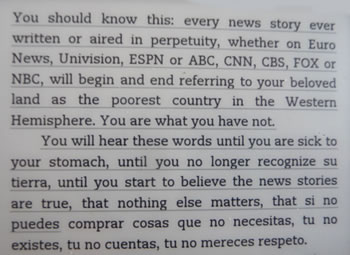 When I reached the end of Ayiti, i wished for the follow-up stories, and (fairy-tale like), for a happy end. At the same time, i could sense how difficult it probably is to write about a homeland that is suffering.

"A story is not a story until it is told."
African Sunrise by Nnedi Okorafor

Another thing I am more aware of these days is how i find books, or rather: which suggestions i follow. i notice a shift to personal suggestions, be it a reading note from a fellow blogger, or a twitter link from an editor or author i know. For "African Sunrise"; it was a tweet by Jason Sanford, editor of StorySouth and organized of the Million Writers Award.

"African Sunrise" is a novella, published online at Subterranean Press. It caught me with the introduction, and its focus on storytelling - it's a sci-fi story, but at the same time, it's a story about voice and storytelling, and about the human tendency to experiment, even when it comes to the human genome.

These are the starting lines:

Specimen
There is no book about me. Well, not yet. No matter. I shall create it myself; it’s better that way. To tell my tale, I will use the old African tools of story: Spoken words. They’re more trustworthy and they’ll last longer. And during shadowy times, spoken words carry farther than words typed or written.

Some pages later, this line: "A story is not a story until it is told. I've always believed that a story is best told in many ways."

And this line: "It looks like your skin is nothing but a veil over something greater,” he said, after an appraising look."

Curious from the reading, i looked Nnedi Okorafor bio, and arrived at this brief version: The American-born daughter of Igbo Nigerian parents, she has regularly visited Nigeria since she was very young. Her novels and stories reflect both her West African heritage and her American life (more). Which probably also reflects in lines like this:

Singular Models & to be singled out

While I was reading African Sunrise, an essay that focused on the theme of story and voice went online at Rumpus, written by Matthew Salesses, an Asian-American author, who talks about the difficulties of growing up as non-white American in a world where white is the norm, here's a quote from his essay Different Racisms II: On Jeremy Lin and Singular Models: "I love books. I loved them as a kid. I could get lost in a book completely, closing off the outside world. .. But I was never able to have that moment, which I realized other kids had, where the character seemed to be me. I was always aware that I was reading about other people. Sometimes people I wished I was. White and with secret powers."

And it's only now while putting this together i notice the ending words: "secret powers" - which is exaclty what the main character in African Sunrise possesses, underneath her non-white skin. Another noticing: the theme of mutation / evolution also was a focus theme in some of the Hugo Award Winning Reads, here's my blog note from 2 weeks ago on the theme: Global reading challenge: reading the Hugo Award Winners 2012

In his essay, Salesses also links to an essay of an Asian-American author who was bullied in her youth and who confronted her former school-"friend" later about this time: Interview with my Bully by Marie Myung-Ok Lee

History and story
Which also connects back to a line in the history book i am reading: that history usually is the story at it is noted down by the ones who won the dispute at question. Maybe that is why the english word history includes "story". The German word for history, by the way, is "Geschichte" - which also is the word used for "story" in general.

More about my current reads, next week. Below, some further links:


Previous reading blog entries
are collected here: bookshelf + monday reads
there also is a visual bookshelf, just click it to get there:

Do you know about Words Without Borders?
http://wordswithoutborders.org/

I use their short story collection in one of my classes.

Yes, i know Words Without Borders - a great page. I featured their recent issue on Mexico in the blueprint lit blog: