Words, Wars, Books, Peace Prizes, Time, Beats, etc. (or: what are you reading?) 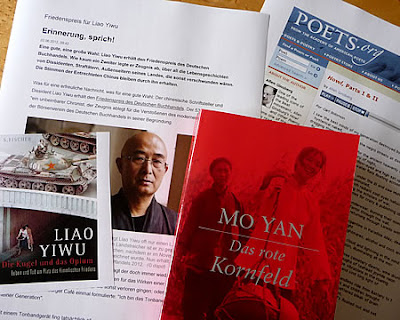 Book Fair Days
It was the week of the books: the International Book Fair in Frankfurt was on, and parallel to it, the Nobel Prize for Literature was awarded. I happened to be on the Fair that very day, and thought i would check the news around 1 pm, but forgot about it with all the events and themes that are on there: national + international halls, new media area, guest land New Zealand, and so many author talks, forum discussions and extra events that the best strategy seems to be: just keep your eyes open while you are walking and go with the flow. More about all the impressions later - now back to the Nobel Prize and the peculiarity it brings for that day:

It was in the hall of the established german book publishers that i remembered about the prize and walked up to the next publisher's counter to ask. The woman smiled and pointed to the shelve: "Mo Yan," she said. "We have one of his books, Ullstein around the corner has the larger program." - i walked up to them, and there it was: an on-the-spot wall for the Nobel Prize Winner. Note the neutral poster for all cases / all optional winners: 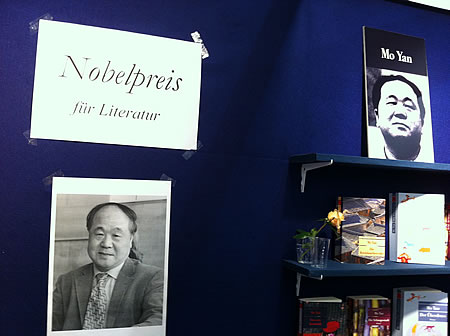 Mo Yan - Nobel Prize for Literature
Back home I checked my bookshelf - and indeed, I still had the copy of Mo Yan's book "Red Sorghum" (which is titled "Das Rote Kornfeld" in German). It's one of the books I started, but didn't finish, a book with multiple timelines that reach back to the time when Japan invaded China. The red in the title refers both to the Communist party, and to all the blood that was shed.

Reading into it again made me think of one of the recent Prize Winners, Herta Müller, which i read parallel to Chimamanda Ngozi Adichie's book on Nigeria and the time of civil war there. back then i noted: "2 books, from 2 continents. both are dealing with war, and the hardship it brings on so many levels, the way it disrupts families, regions, futures. the approach of both books: history, seen through personal lives. another parallel: both books are written based on oral memory." The same is true for Mo Yan. It's a hard, painful and complex read, spanning 3 generations, detailed in all aspects: rural life in China, and the hardship and cruelties the family has to go through. 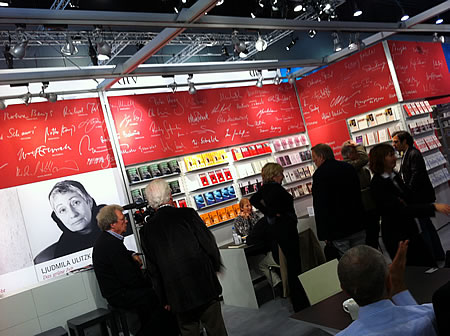 A photo series with books, halls, themes and snaphots from the book fair is online in an own post:
International Book Fair Frankfurt - impressions, themes, snaphots

Liao Yiwu - Peace Prize of the German Book Trade
The Nobel Prize wasn't the only literature prize that highlighted the week - in Frankfurt, the most important German book prizest is awarded: the Peace Prize of the German Book Trade (more here). The recipient this year is from China, too, but unlike Mo Yan he had to flee the country to write his book. It's Liao Yiwu, who took part in the demonstrations of the Tiananmen-Square in 1989 and was imprisoned for years afterwards due to joining the demonstration, and also due to poem he wrote and spoke on the evening before. His book  "Testimonials" / "Für ein Lied & 100 Worte" is the collected history of political and other prisoners, and was released in Germany a few weeks ago. I read into it. I don't find the words for it. I don't think I can read it. The excerpt alredy haunted me and let me wake in a dream of being imprisoned with my feet frozen in a block of ice. Here's a sequence from a video interview with Liao Yiwu:

To think of all those young students, engaging for freedom of speech and thought, and finding themselves imprisoned for years, tortured, killed.

It's hard to imagine, but then, it's something that happens in so many places. It could have happened here when the demonstations in East Germany started, and when the border checkpoints opened in the first night of reunion. It was partly luck that it all didn't end in a huge bloodshed here, like it did in Prague, or in China. It's something that is easily forgotten: how violent life in Europe was for a long time. The Nobel Peace Prize for the EU, as surprising as it was to hear the news - i guess like most, i expected a name rather than an organization - it brought back the larger picture of history. Since World War II, there are ongoing (or rather: endless), mostly bureaucratic and unsexy meeting of European politicians who all are working on the long and winding road to more community and less nationalism. They are also working for peace. It's not often put like that, but when you open borders and share your currency and work together in science and economy, when you do school exchange programs and a thousand other small and large reforms and get togethers (including european song contests), you are less likely to return to warfare when it comes to difficulties between states, because you are codependent or at least connected on so many levels already.

This video shows how common war was in Europe, it reaches from 1000 to today, and almost every change in borderlines meant war, lives lost, homes destroyed, refugees, vengeance, the next conflict - a spiral of bloodshed.

-- update: and here's an article that sums up a lot about the idea of the EU, by the Israeli ambassodor to France: Peace Price for EU

Howl - Allen Ginsberg
From China to Europe - and now to America: the online course on Modern American Poetry (ModPo) now moves to beat poets. The beat chapter starts with Ginsberg’s Howl – i printed it and listened to the audio while reading. Voice adds so much, especially for this poem, and the desparation it puts into words, which probably goes for many of those who lost their life and future when they found themselves between frontiers: "I saw the best minds of my generation destroyed by madness, starving hysterical naked..  "

Previous reading blog entries are collected here: bookshelf + monday reads. there also is a visual bookshelf, just click it to get there:

Some lines about me: I'm into roads, stories, places, crossings, and all the things they lead and connect to. I edit BluePrintReview and the blueprint book + lit blog. Apart from being an editor and blogger, I am also an author myself. My new book Worlds Apart just launched:

Worlds Apart: the true story of 2 friends, 2 journeys, and 10 life lessons
In the global world, a traveler from Europe and a teacher from Asia meet in the web, share their journeys, and the joys, longings, and life lessons that wait along the road. Captured in letters and photos that reach from China and India to Germany and Spain, a dialogue across continents and cultures unfolds: Worl(d)s Apart

Wow - you were in the perfect place for hearing news of the Nobel prize - and The Intl Book Fair seems like it was awesome. And thanks for sharing those links.

Sounds amazing! I might have to check out Worlds Apart. It sounds really interesting. Have a great reading week!

yes, the book fair was awesome, and the Nobel Prize such a good coincidence. seeing all those books from different countries and especially seeing some authors was refreshing, too.

That video with the moving map of Europe is absolutely fascinating. Thank-you for posting it.