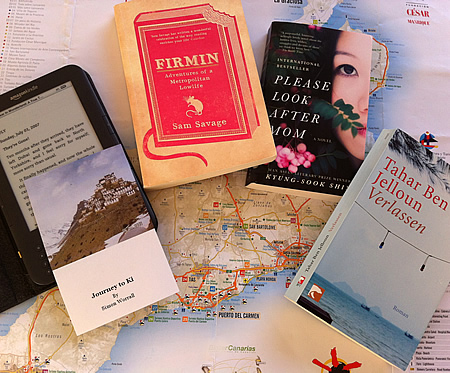 I am still on Lanzarote island, and brought some world books as prelude for the world reading challenge. So it's in Spain that i read my first book from South Korea, and a novel from Marocco. -   The great thing about being on an island is – apart from the walks on the bay and the December sun -to have  time to read. Here are my reads of the last days, and as the first started with a note and quote of first lines, the others follow with a quote, too. (And for some island moments +  the first part of island reads, just browse the recent entries in the blog)

The starting point: a bookshop in Boston

“Firmin – Adventures of a Metropolitan Lowlife” by Sam Savage is the memoir of a metropolitan reader, trapped in the body of a rat who lives in a Boston bookshop - and with it, very much a celebration of books and reading. Starting line: “I had always imagined that my life story, if and when I wrote it, would have a great first line: something lyrical like Nabokov’s “Lolita”...
Great read, a mix of a fable and a bohemian/philosophic book lover story. (Published 2006)

From Boston to Asia

“Please look after Mom” – this novel won the Man Asian Literary Prize Winner 2011, it is written by South Korean author Kyung-Sook Shin. Starting line: “It’s been one week since Mom went missing.”
A family story that spans two generations, set in Seoul city and in a Korean village, and told from the perspectives of daughter, son, husband, and the missing mom. A powerful book about secrets, lifes, and the changing times. This is the first time I read a book from South Korea, so that was double interesting. I arrived at it through the Man Asian book list, and I guess I will also read other books from that list – it seems like a good starting point into unknown countries.

Journey to Ki by Simon Worrall – a travel memoir from the Himalaya. First lines: “I am on my way to the Tibetan Buddhist monastery of Ki. At 5.500 metres, it is the highest monastery in the world, and for two days, we have been climbing up the Sutley River valley towards the India-Tiber border.
This is an e-book in novella length, and an interesting travel read into a region that can only be accessed with special permit, and so the story is both about cultural divides and encounters in the mountains.

From Asia to Migration

“Leaving” by Maroccon author Tahar Ben Jalloun, a novel about the dreams of illegal and legal migrants to find a better life in Spain. Translated starting line: “In Tanger the Café Hana during wintertime turns into an observation station of dreams and of their consequences” from the German edition)
Jalloun lives in Tanger and Paris, and with his novel (published in 2008), he manages to take the reader into the both hopeful and harsh realities of migration, of leaving home for a better life in an unknown place that mostly isn’t welcoming strangers with open arms.
The migrants in the book try the crossing through the Strait of Gibraltar, but others tried it from the African coast to this island here, Lanzarote. Like Gibraltar, it’s an illegal and dangerous passage.

“One Year in Wonderland- A True Tale of Expat Life in Dubai” by Christopher Combe, UK. Starting lines: “The Day I leave Dubai is almost exactly one year on from when I was offered the chance to go there. .. So now, a full year later, and with a head full of conflicting regrets and gut-knotting trepidation, I set off on my final drive to the airport. “
Based on the year-long blog by Combe, this book covers his whole stay in Dubai from arriving to leaving, including side trips to Doha and Qatar. It’s a both fascinating and sobering read: the real life beyond the iconic skylines. Would be interesting to read something from an author from the Emirates now.

*
Together, those island reads also are a prelude for the world reading challenge 2013, here’s more about it, if this sounds interesting to you, you’re very welcome to join:

Reading Challenge 2013:
7 Continents, 7 Billion People, 7 Books (Link)
The idea of this reading challenge is to explore the world by books from different continents and countries, and by visiting various world lists while planning the reads, to encounter the one or other unknown angle and fact about our world.