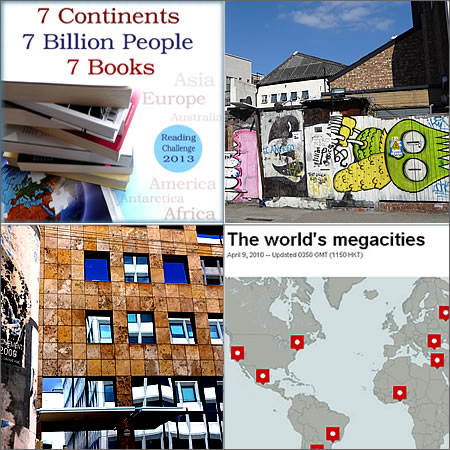 Megacities
The fourth task of the 7 Continents, 7 Billion People, 7 Books Reading challenge is to read a book from one of the megacities of our world.

When does a city turn into a megacity?
One of the most common definitions for a megacity is: a metropolitan area with a total population in excess of 10 million people. Following this definition, the first megacity of the world was New York City, which reached the 10 million mark in 1950. Today, there are about 30 megacities, with the largest of them situated in Asia.

European + American megacities
Here's a look at megacities by continents:
All listings above are based on the megacity statistic in wikipedia. The eductional website wfs put a map together that both inludes large cities with a population of more than a million citizens, and megacities with more than 10 millions - and arrives at the following map: 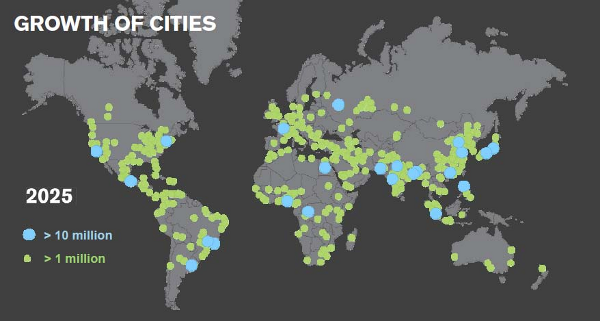 From countryside to city
Some interesting key facts connected to megacities: Our world is a world in change:  for the first time, there are more people living in cities than in rural areas - a dramatic shift in human history. In 1800, only 3% of the world's population lived in cities. Now it's every second person. And many of those who move to big cities start live there in slums: almost one-seventh of the world's population  - one billion people - now live in shanty towns. 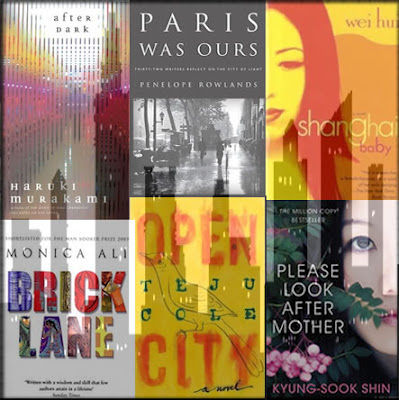 "It would be handy to have a booklist that focuses on megacities" - that was a thought that repeatedly came up while looking for megacity books. And as Goodreads makes it easy to start lists, I now pulled together the information from the various sources and started a megacity booklist.  The list focuses on novels and short story collections set in megacities, here are some recommendations with short summaries: 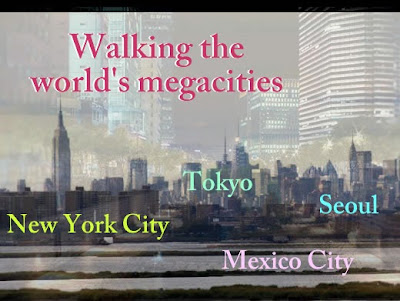 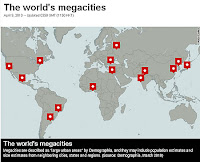 Half of the world's population already lives in urban areas -- and that figure is poised to swell. The United Nations estimates that by 2050, more than two-thirds of the world's population will live in cities. With the rapid pace of urbanization, the race is on to improve the quality of life and health of city dwellers. Urban Planet explores what's being done to create better cities and better lives for the people who live in them.
Megacity wiki: http://en.wikipedia.org/wiki/Megacity

Megacities Film
Film director Michael Glawogger created a trilogy of globalization films - one of it focuses on "Megacities". more about it here: Glawoggers's GlobalizationTrilogy. The subtitle means: "12 stories of survival".

Megacity Research Project
An international, interdisciplinary research program that consists of 10 projects, including research in the Pearl River Delta (China) and Dhaka (Bangladesh).

World future society
An educational website with focus on future trends. The map above is part of their article: In 2025 630 Million of Us Will Live in 37 Megacities 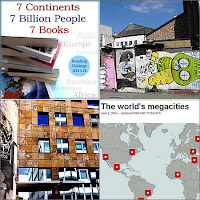 From most populated to the mountains:
A book from one of the 7 highest countries in the world

From high to old:
A book from one of the 7 oldest countries of the world
Posted by Dorothee at 3:43 PM

How I like your thematic posts for this challenge! So many useful links! I'll come back on the weekend when I have more time to study it thoroughly and choose a book for this category.

Ekaterina: so glad you enjoy the posts. it was especially interesting to put this one together, with the global trends connected to megacities, and with the book browsing.