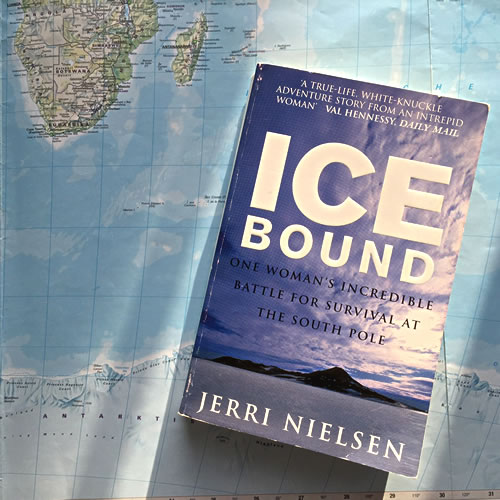 So there it is: the new 7 continents reading challenge. Now where to start - how to pick the first book when you have the whole world to choose from?

Maybe Antarctica, I figured. It's the only continent I so far haven't read a book from, as there are just not that many people (and thus, even less authors!) living there. Which also fitted with this humorous facebook conversation:


7 Continents, 7 Billion People, 7 Books! For 2016, there is a new world reading challenge starting. To join the challenge, select and read seven books, one book from each continent.
- Diana: Are the antarctic books written by penguins? :)
- Chris: 7 billion penguins. :)
- Doro: That would be something :) like the typing monkeys: typing penguins.

Before delving into the books, I read a bit more about Antarctica. Some rather stunning facts:
*

Ice Bound: A Doctor's Incredible Battle for Survival at the South Pole
When I browsed the goodreads list, there was one title that instantly caught my attention: Ice Bound. What fascinated me about it is that it's about the daily life in the South Pole station, written from a doctor's perspective. And that it turns from a casual pole station book to a memoir of a doctor who turns into a patient. Which at the pole in winter means: there is no outside help, and no other doctor. The book also includes some photos, I tried a short vine-video to give an idea:


"Nielsen spent the better part of 1999 as the physician for a team of 41 research scientists and their support group at the South Pole; a place that is completely unreachable for nine months of the year. To "winter" at the bottom of the world risks one's life; in addition, Nielsen was solely responsible for caring for the physical and emotional health of all the other "Polies." Yet, as she writes in a strong, lucid voice, she never felt afraid; in fact, as Nielsen became "of the Ice", a transformation that brings incredible clarity about what's most important in this life, one that unites the Polies in a life-and-death symbiosis in a place where resources are severely limited and the pristine beauty is incomparable. Through power outages, fires and equipment failures, Nielsen found courage, until the day-deep into the pitch-black winter-she absentmindedly discovered a hard mass at the top of her right breast... Captivating and incisive, Nielsen does not present a memoir about illness; instead, this excellent book is about life, work and the depth of human resiliency and love."

The world in an ice dome, or: what we can, what we can't
What amazed me when I read the book was the wide spectrum of themes it included - the pole station is like a microcosmos of our civilization. Adding to that, maybe the combination of both our human virtues and our vulnerabilities stands out even more in this region where we naturally wouldn't be able to survive.

And of course, Nielsen's reflections on her own illness and the therapy spoke to me after I had been a breast cancer patient, too, just recently. But then, just to think that year after year, dozens of people go to the pole to live there - knowing that it is physically demanding, with the darkness, the high-altitude effect, the frostbite, the risk when you are out just some minutes too long - and the fact that there will be no way in or out. It's a survival challenge, only that you volunteer to go there.

It also shows how much we are able to do, and how we at the same time are still at the  mercy of fate: on the one hand, we can build a pole station and live there during the arctic winter. We can build satellites and bring them into orbit, and thus create a world-wide satellite net. We invented the internet, and combined it is possible to connect to the world from anyplace, and have all the information that is out there at ones fingertip. But on the other hand, we are still trying to figure out how our world works, and how cancer happens and how the cure for it - or a prevention of it altogether - might look like, and same with Altzheimer. We came a long way, and have countless libraries filled with knowledge, but we still don't know how to prevent catastrophes, or wars, or the next wave of flu...

But back to the book, or rather: to books. The pole station has an own small library, and it includes the books of the first Antarctica expeditions. And so "Ice Bound" transcends from the present to the past of the pole, to the first explorers, and the power of the word, the way it can share experiences and bring comfort. The quote in the video is expressing a lot in just a few sentences:


"When I was feeling my worst, Big would sit up next to me at night reading passages from Endurance... The story of Shakletone's struggle in 1915 to survive and keep his crew alive touched me deeply and comforted me. He was the explorer who best understood the wild, seductive lure of Antarctica. "I have ideals," he said," and far away, in my own white South, I open my arms to the romance of it all."

Shackleton's name also appears in a reflection at the end of the book, after the first rays of sun finally start to show again in the polar region, and the isolated station time there starts to come to an end:


"We all wondered if, like Scott and Shackelton, we would be compelled to return again and again, trying to relive the exhilaration of our first time on the Ice, and the rapture of being alive."

I followed the book, and looked for Shackelton's notes - and found that there is an e-book at the Gutenberg Project: South! The Story of Shackleton's Last Expedition, 1914-17
About Project Gutenberg: it's a digital library of free e-books. It's a good and different place to browse (it's one of the things I try, parallel to reading books from new places: to also try new places to find books). And a nice addition of Gutenberg: the book opened nicely directly in the tablet; 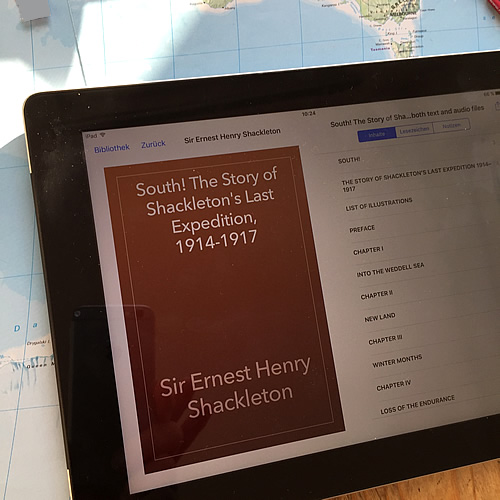 So I read into the past for a while, following Shackleton's Voyage. There is a second book, a collected memoir that I might also visit, by Alfred Lansing. Here's the note for it:


"The astonishing saga of polar explorer Ernest Shackleton's survival for over a year on the ice-bound Antarctic seas, as Time magazine put it, "defined heroism." Alfred Lansing's scrupulously researched and brilliantly narrated book -- with over 200,000 copies sold -- has long been acknowledged as the definitive account of the Endurance's fateful trip. To write their authoritative story, Lansing consulted with ten of the surviving members and gained access to diaries and personal accounts by eight others. The resulting book has all the immediacy of a first-hand account, expanded with maps and illustrations especially for this edition. (Goodreads)"

The immediacy of a first-hand account - that's also what makes "Ice Bound" so touching. Nielsen isn't afraid of the larger topics. There are funny stories included, too, but there are also the tougher days included. Maybe this quote sums it up:


"I don't believe that life can be counted by years or days, but by experience and how you leave the world by the way you live."


Reading Links
So that was my first "continent", or rather: first book of the world reading challenge. Here are some additional links: 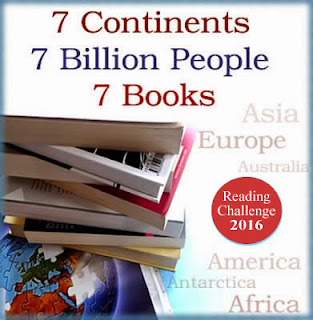 And some pole links: