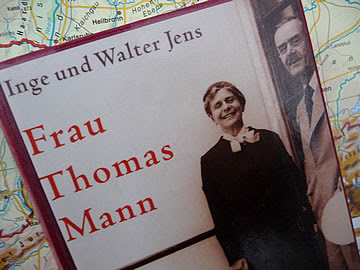 behind every great man, there's a great woman...
that's what i thought of when reading this book. "Frau Thomas Mann" ("Mrs. Thomas Mann") sketches the life story of the Mann family, seen from the perspective of the wife of Thomas Mann (the german author who wrote "The Buddenbrooks", "Death in Venice", "The Magic Mountain", and received the nobel prize for literature in 1929).

the book also is a flashback of the last century - it starts in 1880, and moves through 2 world wars. the Manns left germany after the Nazi regime took over, and first fled to Switzerland, then on into the States. throughout all the years, Mrs. Thomas Mann made sure that her husband could focus on his writing, and took care of all worldly chores.

i picked the book after reading the biography of Inge Jens in November ("Incomplete Memory"), who wrote about writing the Mann book in it. fitting to the theme, the "Buddenbrooks" will be up in TV this week.

Germany#1: and following the theme of books and reads around the world, here the bestseller novels in germany 2009. the top ranks belong to Stephanie Meyer and Dan Brown, followed by 2 german authors: Frank Schätzing's eco-thriller "Limit", and Herta Müller (nobel laureate 2009) with "Atemschaukel".
.
Posted by Dorothee at 10:35 AM