The Leipzig Book Fair is upcoming. It's a fair with a special atmosphere: less business-like, more for readers, with a focus on the smaller, Eastern European countries: Serbia, Slowenia, Croatia, Macedonia, Albania...
(Update, some days later: here some photos from the visit: Leipzig Book Fair - Impressions)

While preparing for it, I came to think about my first visit to Leipzig, and returned to an essay I wrote back then:

Leipzig. It's only five hours from here, from Stuttgart. Still I never been there before. Been to Italy, to India, to Ireland, but never to the East of Germany. Arrived there with a mix of pictures in mind, mostly the blurred memories of newsflashes and films, headlines of reunion and run down cities, Plattenbauten, Goodbye Lenin, the red star, another world in the same country. 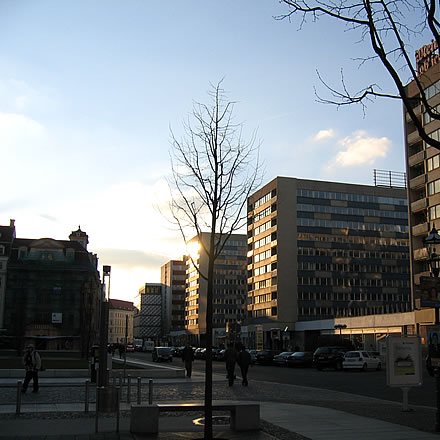 Arriving there, what struck me most were the houses. Ruins of deserted houses next to neatly renovated places with fresh neon signs on top. A bizarre mix of life. And our flat, right in the middle of it. Rented for a long weekend, mostly because the hotels were all full already due to the book fair, this huge happening that brought us here, too. Us, that is: me, B. and J., three friends with a weak spot for books and art. And there it was, our rent flat, next to a Konsum shop, opposite an empty house, with a view to the towers of the city, with a view to roofs roamed by pigeons.

One of the things I didn't realize before: Leipzig was the place where the democratic revolution in East Germany started in 1989. The centre of the revolution back then: the Nikolai-Church. We didn't search for it, simply walked from the main train station towards the centre plaza, and there it was. This church. 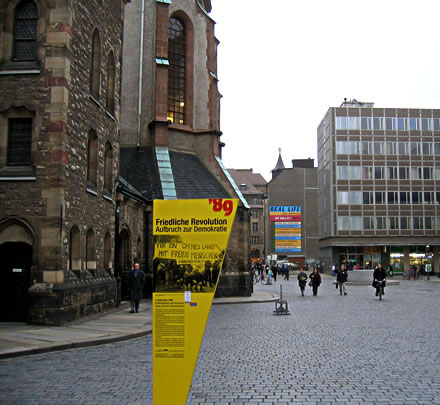 A sign next to it, with lines telling of the past. One of the renovated buildings, to the right. Behind it, an ugly glass square that probably dates back to the DDR times. And a message in the background, painted on a wall. Not an advertising, but a political statement.

Real Life - a manual.
You shall / not
.. burn your passport
.. destroy geography
.. deny citizenship
.. ignore continents
.. separate yourself

Seeing it now, those lines touch a lot of topics that surfaced again and again in places, thoughts, art, books, discussions over this weekend that turned surprisingly political in this city that once was home to Wolfgang Goethe and to Johann Sebastian Bach, in this city that is so livid still. And the people. They are different there. More down to earth. Not so styled like here, in the Western part of Germany. Especially the younger generation. In the TV, you keep hearing about their frustration and depressions as the economy is so low in the East. And then we came there and saw so energetic young people, wearing their own style instead of Benetton and S. Oliver and what not.

Same when we went to the book fair. There was a hall that was focused on underground comics, another on "small languages" - the countries that are small in size, and get hardly published outside their own borders, like Poland, Czech Republic, Hungary. So many young people there. So many topics. Such a variety of books, of voices. 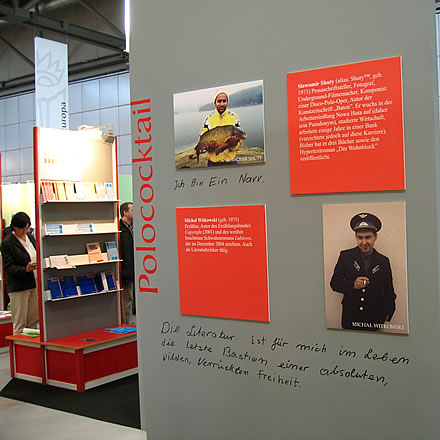 (Translation: "Literature for me is in life the last bastion of an absolute, wild, crazy freedom.")

And then, this feeling: it's a loss those voices are so small, that there isn't more exchange, translation, transfer of idea. That there are so many newspapers and magazines, but that there seems to be a blank spot when it comes the underground, or to the intellectual elite. "The Wolfgang Goethe and Thomas Mann, the Martin Luther, Nelson Mandela, Lech Walesa of our time, where are they?", J. put the feeling in words. "They are all busy writing their biographies," B. answered. She is working in an art publishing company. "It's so much about money," she said. "The art books we make, they are made in such a rush, it's a pity."

Sunday morning then, a long breakfast in our kitchen. a conversation that went more and more from moments to basics. About how our society seems to be dominated by small circles - how a few bands, authors, artists get the main share of interest, and how "International" so often means "Western", even though there is so much more. Same with the global companies - it was somehow frightening to see how they already had taken over the city centre, the main streets. With its shops, it could have been any European town. Starbucks coffee, H&M fashion, book shops plastered with Dan Brown novels to read, two McDonalds to eat, Blockbuster video to rent, Hallmark postcards to send, and on and on.

But what to do. How to change that. How to turn to more individual, broader in perspective, deeper in reflection. How to make a difference. And what difference can one person make anyway in this global world, we asked, there, in this other city, in the kitchen that was ours for some days. It was the radio that gave the answer, that announced the counterpart thought. "Wir müssen etwas bewegen, sonst bewegt sich nichts," Xavier Naidoo sang. - "We have to make a move, otherwise nothing will start to move." 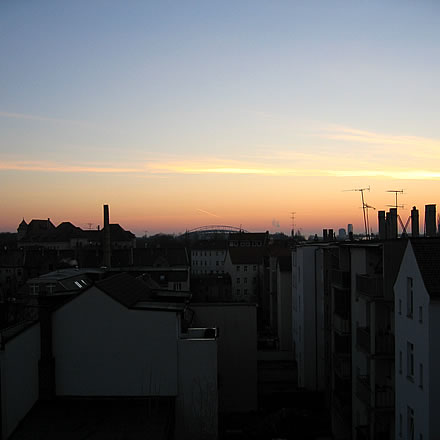 Sitting there, we played with the thought, what would happen if for some days, everyone would get out of the routine, and instead of watching TV, would go to see a new place, to learn something about history, to browse those unmentioned books, to look for new tunes, to remember the past, to paint a picture of the future, to think about his or her place in society.

What a difference it could make, such a quiet rebellion.

PS, or: The whole Leipzig Story

After returning from the second trip to Leipzig, I started a file with all the notes that connected to this trip to Leipzig. It now turned into an e-book: Leipzig, or East West Real Life - A diary in time.

This entry belongs to edition #5 of the Language/Place blog carnival.
Posted by Dorothee at 3:06 PM