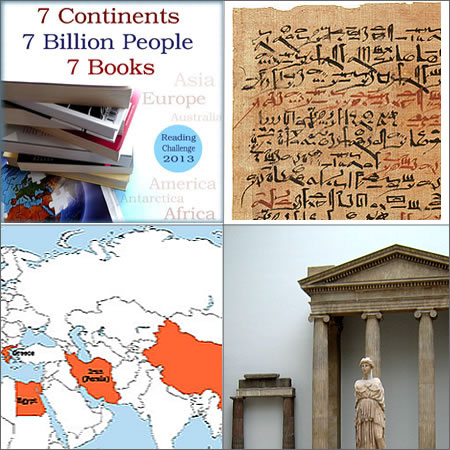 Into the Past....
The third task of the 7 Continents, 7 Billion People, 7 Books Reading challenge is to read a book from one of the 7 oldest countries in the world. 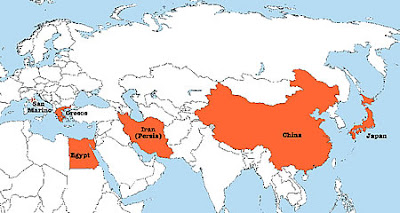 Book links
If you want to venture into the literature of those oldest countries, try the following Goodreads and Wikipedia lists, in general Goodreads more contemporary authors, while Wiki reaches back in time:

Into the past:
Relation between oldest countries - oldest works of literature?
Looking at the map, it comes to mind that some of the marked regions are also home to some of the oldest works of literature in the world: Japan is the place where the world's first novel was written, in the ealry years of the 11th centurs: "The Tale of Genji". And Greece is the place where the Western literary Canon started, with Homer's epics "The Iliad" and "The Odyssey", 800 BC. (More about Genji and Homer, below).

Then there's China, with the Tao Te Ching, written around the 6th century BC, a text that that strongly influence art, philosophy and religion inside and outside Asia. And reaching even further back is the Epic of Gilgamesh, an epic poem from Mesopotamia (a region that Iran partly belonged to). Written around the 18th  century BC, it is one of the earliest surviving works of literature.

**
and here, a bit more about Genji and Homer:

Written in the eleventh century, this portrait of courtly life in medieval Japan is widely celebrated as the world's first novel. The Tale of Genji is a very long romance, running to fifty-four chapters and describing the court life of Heian Japan, from the tenth century into the eleventh.

collective reading notes: The Summer of Genji - a joined approach to tackle this classic read. Even if you don't have the time (or patience) for a 1000+ book, it's well worth visiting the reading website. It includes a whole string of posts that lead far beyond the story, to topics like translation / categorization, and to the process of reading itself, especially when it comes to books from other hemispheres.

Homer's works begin the Western Canon and are universally praised for their poetic genius. By convention, the compositions are also often taken to initiate the period of Classical Antiquity.

The formative influence played by the Homeric epics in shaping Greek culture was widely recognized, and Homer was described as the teacher of Greece. Homer's works, which are about fifty percent speeches, provided models in persuasive speaking and writing that were emulated throughout the ancient and medieval Greek worlds.

Homer and his works at Goodreads + Wikipedia

I've read all the works mentioned in this post, as I am always curious about "the guys who did this first" :) Gilgamesh epic is still pretty modern, I think, and I enjoyed it a lot. Besides, it is short and easy to read :) Genji took me more than a month, but it was certainly worth it! The strange ways of medieval Japan are very curious. I don't remember much of Homer's epics, because I read them long ago. I should probably re-read them again some time. For this stop of the challenge I have started to read Aesop's fables - something I was meaning to do for a long-long time :)