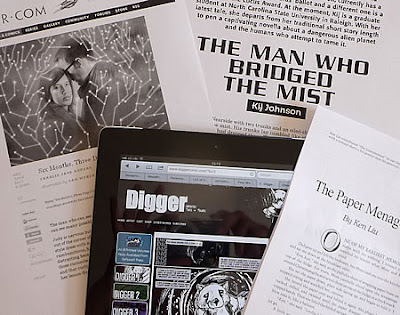 A week ago, the Hugo Award prize winners were announced (the official Award description is: "The Hugo Awards are awards for excellence in the field of science fiction and fantasy. They were first awarded in 1953, and have been awarded every year since 1955.")

Paper Shapes + Cultures
Turns out, a lot of the nominated and winning stories are directly available online, to encourage reading them. I started with the short story that won: “The Paper Menagerie” by Ken Liu. It’s a powerful, painful, multicultural story, with an element of fantasy. It also is an ode to the forms and shapes we can form with paper, both in Origami-form, and in writing. So good and unexpected. Here’s the pdf-link: Paper_Menagerie.pdf (best way to read the pdf is probably to print it, cut it, and fold it into a mini-book.)

Evolution + Choice
While Paper Menagerie connects back to the past and the special abilities that once maybe existed in some persons / groups, and got lost in modern times, the story "Movement" by Nancy Fulda moves into the different direction: the evolution of species in time, and the task of having a slightly different kind of human mind - a task that the story mirrors in an unusual plant that started to grow in the city: "It is a critical juncture in the evolutionary chain ... The plant may quietly extinguish, or it may live to spawn the next generation, a generation more uniquely suited to survival than any that has come before." --

It's a short story that made me wish for the longer story, for Movement, the novel. And it porbably is also a topic that is in the air: the prize winner of "Best Novelette" deals with the same theme, only from a different angle: "Six Months, Three Days" by Charlie Jane Anders tells the story of a woman who has the abilitity to see possible futures, and who meets a man with the same ability. It's a love story, but also a story about life questions, dreams and choices, and a life that at first glance, might bring the key to avoid wrong decisions, and take the shortcut to the supposed dream life: "You know how it'll all turn out. Why not pick a future where you win the lottery, or become a star?" - here's the story link: Six Months, Three Days.

In other Worlds & Libraries
Right now, I am reading the prize winner of the category "novella": “The Man Who Bridged the Mist”, by Kij Johnson, which is a longer story, set not in our world, but in a fantasy land. Just like the other story from the Hugos that i am still reading: Digger by Ursula Vernon: "A wombat. A dead god. A very peculiar epic."  Which was awarded the prize for the "Best Graphic Story".

Digger on first glance is the story of a wombat who gets lost digging, and when digging up back to the surface, arrives in an unknown place: a temple of Ganesh, the (real) God of Obstacles. I started to read into it, and then kept clicking "Next" and "Next"... it’s superb, a story of an odyssee, with so many layers of humour and philosophy and identity woven into it. And like the Paper Menagerie, it's an ode to words, language, books and maps. It includes an old library, see screenhot below, here's the page with it: Digger enters the library . From format, Digger is a self-published web-comic-saga that spans 7 years of creation. Digger got published by an indie publisher, and for the Hugo Award, competed with big names and larger publishing houses - and won. Here's the starting point of the Digger story: "I've been digging for a long time..." 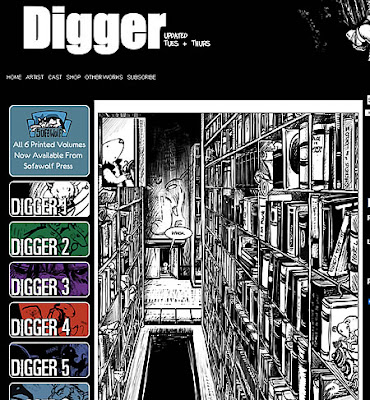 this blog post is inspired by the blog series "It's Monday! What are you reading?" which is hosted by Sheila at Book Journey. It's a blog initiative to share ones own reading and to see what others are currently reading. participating blogs are listed in this Linky Book List

What about you? What are your reading this week?
Posted by Dorothee at 3:05 PM

Wow, I hadn't realized that over half the wins went to women. Go awesome fiction-writing ladies! I read these earlier in the year when they were nominated for Nebulas. Kij Johnson and Ken Lui have definitely earned places among my favorite short story writers.

You have been reading some amazing books! Intelligent and thought-provoking. :)

I can't wait to start reading some of these. Thanks for posting the links.

:) Wendy, thanks for that line. i never really know how to sum up my reading.

and a really great thing about the Awards is the open accessibility of the winning stories. my personal fav is Digger so far.