here is the next step of the alphabet journey, today is all about colors. or rather: all about 1 color 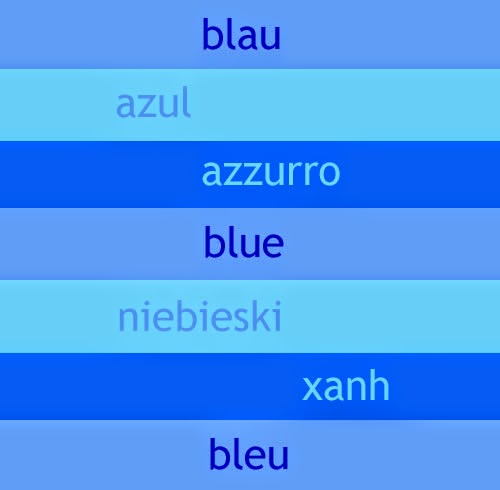 "blue" turns to "blau" in German, and to "bleu" in French. for Italians, it is "azzurro" and for Portuguese it is "azul". "xanh" is the Vietnamese blue - and niebieski is the Polish blue. (more blues, here: translations of blue)

and that is just one simple word. it is astonishing to think about the complexity of language, and all the different languages that are out there, each with an own set of words, some even with an own alphabet. here's a list of the top 100 languages of the world, by estimated number of speakers.

And how many languages are spoken in the world?
"More than you might have thought", states this article of the linguistic society:


"As of 2009, at least a portion of the bible had been translated into 2,508 different languages, still a long way short of full coverage. The most extensive catalog of the world’s languages, generally taken to be as authoritative as any, is that of Ethnologue (published by SIL International), whose detailed classified list as of 2009 included 6,909 distinct languages."

which would make it 6900 names for blue.

Ah, blue. A feast for the eyes. Interestingly, the Vietnamese word xanh (pronounced something like san or sang depending on local accent) means both blue and green. To differentiate, one specifies "leaf xanh" or "sky xanh".
So many languages in the world. It's sad how many of them disappear every year. The extinction of languages is happening at an astounding rate. Imagine being the only one or one of a few left who can understand your language.

love knowing so much about blue--such an inspirational color

"leaf xanh" and "sky xanh" -- that is a beautiful way to put it. so fascinating about languages and all their variations. we have "Himmelblau" in German as description for a certain touch of blue: "sky blue"

glad you enjoyed the blues.