qarrtsiluni: Dealing With Family and Friends 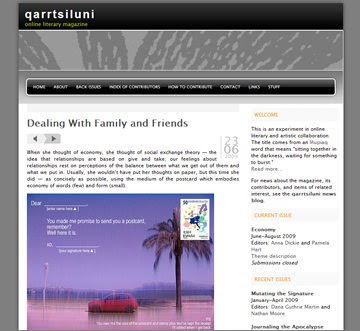 the great side-effects of journeys: photos. especially those that come out all different than expected. like the one above. taken in April, in Mallorca, on the day i had a rent car, parked it right at the bay drive to get some stuff, and walking out of a mini-market, thought: Kodak-Moment. only that my camera was in an odd mood. which i noticed when downloading the images. i almost erased the odd-mooded one, but then left it: all it would take up is some disc-space, right?

a bit later, qarrtsiluni announced their new theme: economy. here the key paragraph of the call:
"We urge you to think broadly, associatively and imaginatively about this touchstone word. Consider economy of movement, expression or effort. Think fuel, cash or gift economy. In your investigation, remember the epigram and the epitaph, both concerned with the economics of composition. Think about how the subject might inform style, as well as content."

'economy'. i scribbled the word on a paper, which then drifted back between its paper companions.

then Karyn mailed. with some lines of text and "the necessity of images [currently absent]".

i browsed file. and tried. 1 image. the odd one. there, with Karyn's text lines, it turned out right.

and from there, it unrolled. even the rent car found its place.

here, the text: "Dealing with Family and Friends".