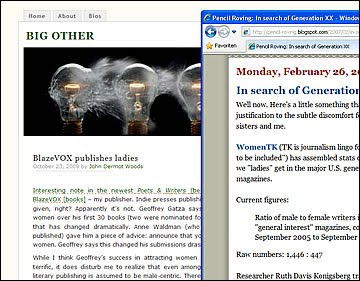 via facebook, i came across an interesting post that reflects on the question to which degree the indie lit scene might be male-centric: "it does disturb me to realize that even among independent presses, literary publishing is assumed to be male-centric. There is obviously an implicit hostility to female writers."

the post is up here in Big Other:
"BlazeVox publishes ladies"

this is a topic i was pondering on last year, when BluePrintReview submissions moved from rather balanced to more male. i posted some lines in a comment, but thought i include them here, too, so that they pop up with the blueprintreview tag for magazine readers / contributors:

here’s a bit from my experience as editor of the literary online magazine BluePrintReview.

last year, i did some research on this theme, that’s how i came across this bit of statistic:

——————
“WomenTK (TK is journalism lingo for “to come”, i.e. “yet to be included”) has assembled stats on how many bylines we “ladies” get in the major U.S. general-interest magazines.

“The numbers speak volumes, but they’re not the whole story. As a former editor at The New Yorker wrote me in an e-mail, ‘in addition to counting bylines, you should look at what women are allowed to write about. I’ve been struck by a pattern, at The Atlantic in particular, where women only seem to write about marriage, motherhood and nannies, obsessively so. If you count the number of women’s bylines there that weren’t about hearth and home, the number would approach zero.’

(this was online here: http://www.womentk.com/ – unfortunately, the statistic isn’t online any more, but it’s still up in a blog, here: in-search-of-generation-xx, with some additional quotes)
——————–

the thing that struck me back then was the ratio:
3 to 1 — which fitted with the submission ratio i received back then, too. right now, the submissions are rather even. my guess is that the issue styles / characterists / gender ratios themselves are influencing the submissions.

as to my own gender: female. (one funny thing is that some (male) contributors seem to assume that editors are surely male, too – every now and then i receive submissions that start with “Dear Sir”. the last time that happened, i couldn’t resist, and wrote back: “Dear Madam.”)
.
Posted by Dorothee at 4:20 PM