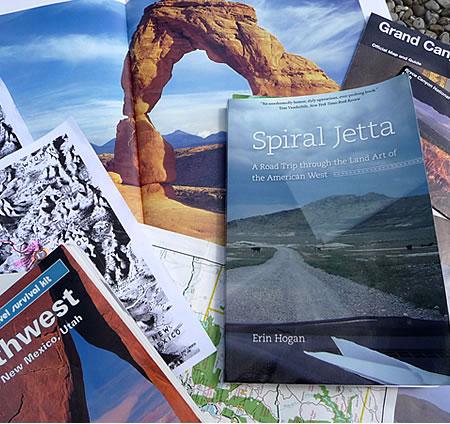 "Since you previously requested a free e-book from the University of Chicago Press, we thought you'd like to know about the August free e-book selection, Spiral Jetta: A Road Trip through the Land Art of the American West by Erin Hogan." said the mail. included was an image of the book cover: a road picture.

so i clicked. read the first pages. knew that i wanted to read it all. went looking for it, yet got informed that the book is currently not in stock in Europe. tried second-hand, against the odds. was lucky. ordered. received. and now am reading it. and like with a real road trip, it takes me to unexpected places and sparks chance encounters.

Visiting Spiral Jetty I
turns out, the first stop of Erin Hogan's trip is: Salt Lake City. where she stays in Motel 6. from there, she goes to visit the Spiral Jetty. and then drives to Moab. which sets me moving in 2 directions: first trip to the USA, our place of arrival was: Salt Lake City. "Do you remember in which hotel we stayed there?" i ask R. he doesn't. me neither. but my travel notes remember: yes. Motel 6.

we could have gone to visit Spiral Jetty, i realize. we were so close. only that back then, i didn't know about it. the first time i saw it (or rather: a photo of it) was in London. Tate Museum. there was this room with a large abstract installation on the ground. and on the wall, there was a photo of the Jetty. i still remember standing there, in between the installation and the Jetty image. trying to imagine it. (image/imagine. how does our mind make an image when we imagine something?)

so i follow Hogan, on her trip there. and look for that image from Tate. arrive at it (i think) on a page that comes with other works: Artists Among Poets-Earth & Installation Art.

back to the book, to the Jetty, and to the gap between anticipation and reality, when Erin Hogan arrives at the shore: "With my first earthwork now in view, I confronted a major discrepancy between what I had imagined - aided by images - and what the work actually was. .. Expecting it to be grand and finding it is not gives you a sense of human scale in a very unlikely place."

i read on, then sidetracked, and looked for a youtube-clip of the spiral jetty, to get a moving impression. and found one that walks you out there in a Spiral Jetty Timelapse.

Canyonlands / Arches
from Salt Lake City, Hogan's trip moves on through Canyonlands to Moab, where she visits Arches National Park, and notes: "At Arches there are very few edges, as with Robert Smithon's salt [which encrusts Spiral Jetty], time reveals itself in curves and layers and strata. It is not the three decades of Spiral Jetty that one measures in walking through this landcape but the deep sense of geological time, of rivers working their slow magic, ceaselessly rubbing away at the rock... Another radical shift in focus from Spiral Jetty to Arches is the change in how time looks: Spiral Jetty has been shaped by addition, not substraction. At Arches, time is measured by what is worn away. It seems more human somehow, related to our aging process of shrinking and becoming diminished."

Arches. we've been there, too. back then, we brought the pocket camera. i go looking for the pictures, and find almost no shots from there. right, i think: i tried to capture some places, but felt it won´t really work. but there's the "USA-Südwesten" photobook, with a huge Arches image. and there are other photos from our trip. here's a collage: 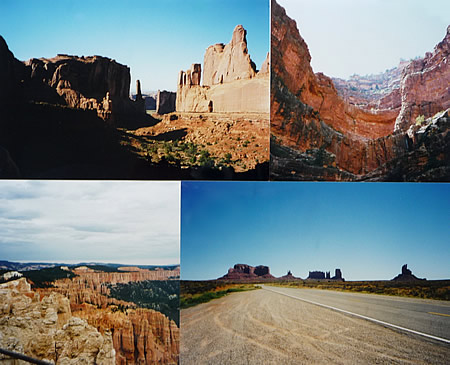 i remember the drives there, endless roads. a 360° horizon. an own rhythm to the days there, under this vast sky. and Arches: like natural land art.

before Moab, Hogan tried to find the "Sun Tunnels", but due to mismatching driving instructions, she missed them. her next land art site to visit is near St. George, the "Double Negative" by Heizer. i start to read the chapter, then feel that i am going too fast - i find myself already halfway through the book. plus, i am curious for other experiences of visiting the Spiral Jetty, and for the Sun Tunnels. so i go looking for a possible blog with notes. and arrive at from the floor:

Spiral Jetty II + Lightning Field
"From the Floor" is a blog by Todd Gibson, who writes about looking at art from the floor of the gallery, the museum, and the private collection. this blog, i once followed it for a while. running into it feels like running into someone you met in another place. in this case, this someone took lots of pictures, and wrote about his trip in several entries, starting with Back from Spiral Jetty.

Todd Gibson also visited the land art site "Lightning Field" and blogged about it here: A Pilgrimage to the Lightning Field. it's a place that is yet to come in Hogan's journey. looking forward to it, especially after i saw a glimpse of it in this clip: The Lightning Field. interesting, too, how youtube adds this moving third dimension to travelogues and photos.

some extra notes + links
- Part 2 of this road/art trip: curves / roads / art: land art, Lightning Field, Lanzarote
- the "Spiral Jetta" as free e-book: info link
- there also is a book-feature about the book in the blueprint book blog
- and on a more personal note: seems art and travel are a reocurring theme this summer: there was my own trip to Paris in July, with a focus on Impressionists and modern art (Paris moments). then, earlier this month, Hamis Fulton and his art of "walking journeys", and Ursula Vaira's journey poems (and see what happens). and now, this land art theme.
Posted by Dorothee at 4:34 PM