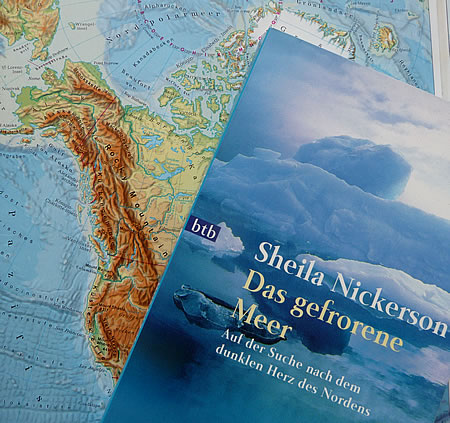 yesterday, i finished the Alaska book that i started last Sunday: "Disappearance. A Map." by Sheila Nickerson.

it's both an intriguing and reflective read, just like the subtitle suggests: "A Meditation on Death and Loss in the High Latitudes". it's also a journal of transition, of ending work life and finding a new pace, and of leaving home for a longer time. and it also connects to the theme of exploring the past of the place we live in. here's a short summary that gives an idea of the structure of the book:

A former editor of Alaska's Wildlife, poet Nickerson reaches back to early frontier Alaska, to the Russians, American missionaries, Sir John Franklin and subsequent polar expeditions. She also meditates on another kind of loss - the disappearance of the shamans, language and culture of the natives and of the land's natural resources. Nickerson follows recent disappearances of hikers, tourists and pilots. The stories of death and loss are interwoven with reflections on her own life in Alaska. Together, the Disappearances gives us a sense of place not found in ordinary maps. (based on a summary by Publishers Weekly)

and now i wished i had the english edition, to quote Nickerson's thoughts and notes on maps gathered in an exhibition. here's a reversed translation from German:

A place can be mapped in many different ways.
Maps are helpful, but never neutral.
Take the power of maps in your own hands.

and more quotes: with all the reflections, the book also brings cross-connections to other written works. one of the books quoted in it is “A journal of solitude” by Mary Sarton:

September 15th
Begin here. It is raining. I look out on the maple, where few leaves have turned yellow, and listen to Punch, the parrot, talking to himself, and to the rain ticking gently against the windows. I am here alone for the first time in weeks, to take up my 'real' life again at last. That's what is strange -- that friends, even passionate love, are not my real life, unless there is time alone in which to explore and to discover what is happening or has happened. Without the interruptions, nourishing and maddening, this life would become arid. Yet I taste it fully only when I am alone here and 'the house and I resume old conversations.

only the first sentences are quoted, but they made me go and look for the whole paragraph, and for a description: "Written over a period of twelve months, May Sarton's Journal Of A Solitude (1973) is a meditation on life, living alone, romantic love, and the creative process. Composed in diary form, the book was produced while Sarton was living alone in a small village in rural New Hampshire. By 1973, Sarton was fifty-eight years of age."

interesting: both books are described / or describing themselves as meditations.
another cross-connection: the journal parts of Nickerson's book are written in 1992. there is no birth year stated, but as she moves to retirement in that year, she probably is born around the same time as Sarton.

in the journals parts of September, Nickerson quotes reports of the body of a young man who was found in a bus in the wilderness. in the following days, the identity of the young man can be placed: it's a student who went to Alaska to spend time alone. his name: Chris McCandles.

the story: i read the book about it years ago, and later, have seen the film: "Into the Wilderness" - and blogged about it in this blog, also in wintertime. so to round up this post and meditation, here's the entry: 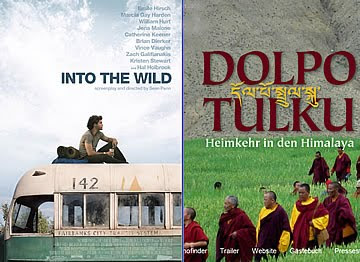 two journeys on the screen in two days: yesterday, i watched "Into the Wild" - the film that is based on the book written by Jon Krakauer. i read the book some years ago, the life story of Alex/Chris Supertramp, who finished college and then went for a long journey to the southern border of the US, then to the north, into the wild of Alaska, to leave civilization behind for a while, taking just some basics, and some books.

and this afternoon, i went to see "Dolpo Tulku - Returning Home to the Himalaya" - a film docu about the life and work of a nepalese monk, who tries to bring some basics of civilization into the Dolpo region of Nepal: schools. hospitals. electricity. roads.

such a counterpart, and at the same time, so many parallels: vast landscapes. books. thoughts about the essentials of life. the charisma of Alex. and of Dolpo Tulku. the different ways they say the same thing: that life isn't about having fun. and of course, the mountains. silent and huge and eternal.

----
Reading Challenge Notes
this year, i am taking part in a global + an european reading challenge. the idea: to read books from each continent of the world / several countries of europe. this is the first book this year that crosses the Atlantic - here the previous book notes:
- Global Reading Challenge
- book 3: Paris was Ours (Europe/France)
- book 2: Anar (Middle East)
- book 1: The Tigers's Wife (Europe/former Yugoslavia)
- virtual bookshelf
Posted by Dorothee at 7:25 AM