1 million books published, 9 books read, and 25% non-readers: book figures from around the world 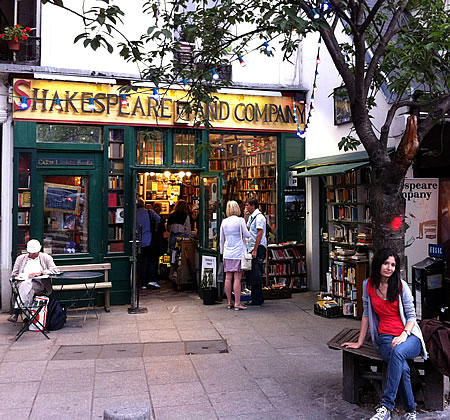 How many books are published each year worldwide? Which country publishes the most books? And what about readers - how many people read books, and how many are read, on average? That's some of the questions i pondered and googled in the last days. Below, some of the answers. And above, to add some real books to all the numbers, a photo of a wonderful international bookstore: Shakespeare and Company, full of english books, in the middle of Paris.

Books Published
The following map is from Worldmapper, based on 1999 statistics.
According to their database, the sum of all new books titled published worldwide in 1999 was: 1 million. Based on the number in total and numbers per country, they created a map that shows the distribution of the new books worldwide. The most new titles were produced in the United Kingdom (pink), China (green), and Germany (darker pink). 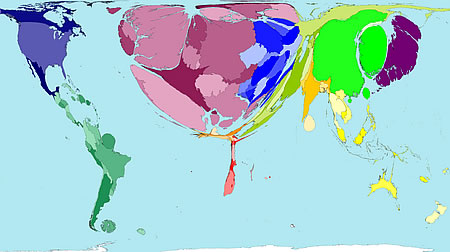 A number that is included in their page: "The world rate of new titles is 167 books being published per million people per year." That would make it 1.6 books per 1000 persons. It will be interesting to see how this number has changed / will change in time with e-books and POD-services.

Reading and Writing: Literacy
Another map from Worldmapper that is about reading: Adult Literacy 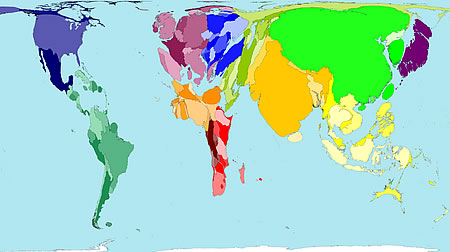 (Map explanation: Territory size shows the proportion of all people over 15 years old who are literate, that live there. In this map, adults include people aged 15 years and over.)

Worldwide, 3.6 billion adults are literate; 82% of the adult population are able to read and write simple statements - while 18% aren't. The largest populations of literate adults live in China, India and the United States. India has a literacy rate of 61%, the other two territories have rates of 91%. (Another map related to this theme: Youth Literacy)

First World Literacy
If you are surprised that China and India is so huge in the map - that's not because the literacy rate is highest, but because the overall population in those areas is very high. The listing of literacy rates can be found at wikipedia:  wiki/literacy. It comes with a blind eye, though, and states: "For highly developed/high income countries where literacy statistics were not collected, a rate of 99% was assumed."

You only need to click to another page of wikipedia to learn that the 99% are hopeful but unreal, and ignores the fact that there is a considerable group of people who can decipher single words or short sentences, but otherwise is at a loss, as they deal with Functional Illiteracy: "All over the U.S.A. 30 million (14% of adults) are unable to perform simple and everyday literacy activities." - The ratio in Germany is almost the same. "In Germany, according to a new university study, 4%  (2 million) adults are illiterate, and 14% (7 million) are functional illiterate. (Analphabetismus, "In Deutschland sind 2011 nach einer Studie der Universität Hamburg ca. 4 % bzw. 2 Millionen der Erwachsenen totale sowie 14 % bzw. 7 Millionen funktionale Analphabeten.")

It's hard to imagine, and a topic that isn't often discussed, probably also because many in this group aren't ready to talk about it, but instead learned how to cope with it. also, for migrants, there are special language courses, as obviously, they need to learn the new language first. but generally, it is expected that every adult can read, especially Germans who grew up in Germany (the majority or the functional illiterate are Germans). 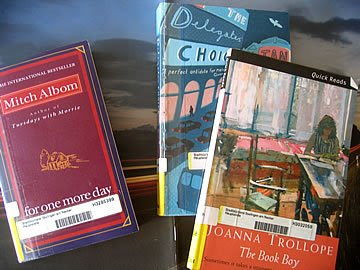 Looking at those tiny, painful numbers, i remembered a book i once read: "The Book Boy" by Joanna Trollope. A "quick read" in only 94 Seiten in large font. A book you easily can read during a sunny afternoon. When you are able to read, that is. How does it feel to be unable to read? To be like Alice, the main character of Book Boy
"I can't - " Alice stopped again, and took a deep breath. "I can't - read very well."
Mrs Chandra looked amazed. "What has that got to do with anything?"
"Everything," Alice said. "Everything. It makes me - different."

2 Surveys
From the world to the single persons - here are 2 surveys that asked people how many books they read in the last years. One is from the USA, one from Germany (where i live). The surveys come with a surprise parallel: in both countries, the group of people who didn't read a book in the past year is 25%. And the average number of books read is: around 9. Here are the links and some quotes + notes:

USA: Average of 9 books, 27% non-readers
One in four adults read no books at all in the past year, according to an Associated Press-Ipsos poll. Who are the 27 percent of people the AP-Ipsos poll (2007, Link) found hadn't read a single book this year? Nearly a third of men and a quarter of women fit that category. They tend to be older, less educated, lower income, minorities, from rural areas and less religious. At the same time, book enthusiasts abound. Many in the survey reported reading dozens of books and said they couldn't do without them. Among those who said they had read books, the median figure _ with half reading more, half fewer _ was nine books for women and five for men. The figures also indicated that those with college degrees read the most, and people aged 50 and up read more than those who are younger.

This survey was also picked up by a book nerd who blogs and went into more details, and calculated the average number of books read by American readers: about 9 per year: Link-Mad Response: American Reading Habits Will Surprise You

Germany: Average of 9 books, 25% non-readers
According to a "Lesen"-survey from 2008, 25% of the adults said they read no books at all in the past year. On the other end of the reading spectrum are 25% who read between 11 and 50 books per year. 3% read more than 50 books per year. (adults include readers over 14 years). Another large survey asked for the number of books read  in the last year: the average numer of books read in Germany is: 9 books. (the survey also included Switzerland (average 8 books), and Austria (average 11 books).

On the note of books and the world, there was a world-book-diagram in this blog in March, here's the key note and diagram:

This is all very interesting. I will have to look at it again in detail. From personal experience I know only two things: 1. All I do IS read - massive amounts continuously; 2. As a small publisher, almost impossible to get someone to buy a book (even family). Glad to hear, though, that the word is not dead yet. How could it be? We are the only species with this ability (and it has taken us a very long time to develop it).

Great post. Mexico grew quite a bit in that second map. Interesting stuff.

Yes, so interesting! For me, some of the figures are expected, and others are almost surreal, like the percentage of functional illiterates here. Right now, i am piecing together a larger post for World Book Day - more about that when it is online.