This week: The revolution brought by writing, The purpose of art & The poet's task 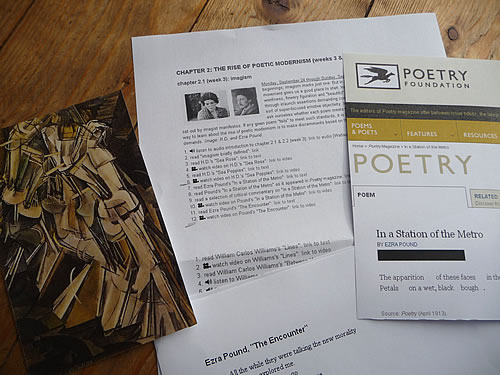 "A poem is a machine made of words" - Williams


Week 3 of ModPo, or: a larger image
Week 3 of the online course ModPo (Modern & Contemporary American Poetry) is coming to conclusion. So glad i joined this courses, which became a daily practice by now - to read the next poem, to listen to the video discussion, to visit the forum.

In the current week, the main theme was the rise of Poetic Modernism, and with it, the course discussed formats as different as Ezra Pounds haiku-like 2-liner "In a Station of a Metro" and the classic modernist poem of William Carlos Williams: "The Red Wheelbarrow" that starts with the words / key: "so much depends / upon"

Also, for the first time the course visited and discussed 2 artworks: Marcel Duchamp's ready-made "Fountain" and his modernist painting "Nude Descending a Staircase"

Such a wide circle of thought - especially with the meta-level of modernism, and the way the poems address the idea of writing, which leads to general discussions of poetry, art, the artist's task.

The great thing about the course is that it leads through all those selected poems & poets & angles & artworks & reflections, while providing a string that is easy to follow and that cross-connects all those different works and thus provides the approach to the the larger picture -- the first two weeks formed the base, it feels, with their focus on Whitman and Dickinson, who both challenged the official verse culture, each in their own way, and the step from there to other "challengers": William Carlos Williams and the beat poet Allen Ginsberg.

Two quotes i want to keep from this week: the one at the start, "A poem is a machine made of words."

And this one, on art and the meta-nature of it, from the ModPo discussion on the Fountain:

"The purpose of art is to think about what art is."

The revolution brought by writing
In almost perfect timing, the book i happened to start to read in September, and which by now became a daily habit, too - "A History of the World in 100 Objects" - arrived this week at the theme of, yes: Writing. Or to say it with the object that delivers the theme: "Early Writing Tablet". Made of clay, it its, found in Southern Iraq, and dating back to 3100 B.C.

The chapter starts with the words: "Imagine a world without writing - without any writing at all."

Here's a photo of the page, and below the central quote by John Searle, Professor of Philosophy at the University of California, Berkeley. 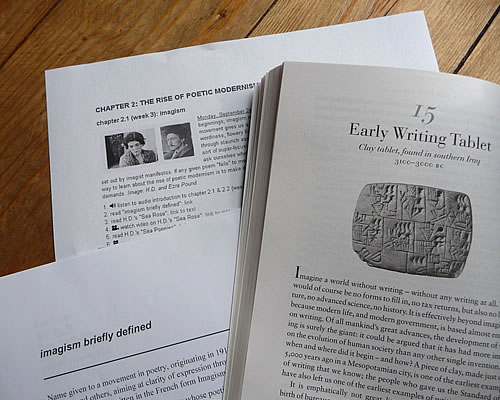 "Writig is essential for the creation of what we think of as human civilisation. It has a creative capacity that may not even have been intended. .. I think you don't understand the full import of the revolution brought by writing if you think of it just as preserving information into the future. There are two areas where writing makes an absolutely decisive difference to the whole history of the human species.
One area is complex thought. There's a limit to what you can do with the spoken word. You cannot really do higher mathematics or even more complex forms of philosophical argument, unless you have some way of writing it down and scanning it.
So it's not adequate to think of writing just as a way of recording, for the future, facts about the past and the present. On the contrary, it is immensely creative. But now a second thing about writing, which I think is just as important as that, and that is when you write down you don't just record what already exists, but there are elements in which you create new entities. You create money, you create corporations, you create governments, you create complex forms of society, and writing is essential for all of that." -


- Which, of course, also goes for online university courses and histories of the world.

Looking for the quote, i just discovered that all episodes of the book are up as online podcasts and transcripts, here's the one on the Writing Tablet: A History of the World - Transcript of Episode 15


Upcoming: Gertrude Stein and the awareness of the way words work

The next week in ModPo will focus on Gertrude Stein, which feels like the perfect next turn from here: Stein "took ordinary language - the "language of information" - and makes it strange, forcing us to be acutely aware of the way words work." (The Difference in Spreading)

Thinking of it, the definition also connects back to the idea of a poem as a machine made of word.

Next to the 2 quotes, and the reflection on writing, there's a longer text i want to add here, to keep in direct reach - it's a conversation from the ModPo forum, the first i started, inspired by Lorine Niedecker's poem: "Poet's Work" 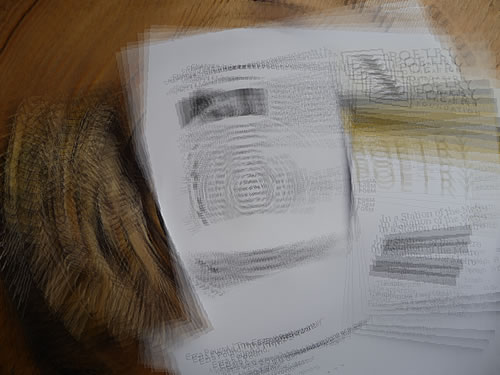 While reading "Poet's Work", and while watching the video discussion on the poet's task to condense his or her impressions / reflections into the form of a poem, it struck me that the German word for poet actually is: "Dichter" - which is derived from the verb "dichten" - to condense. A single poem is a "Gedicht" - a "condensation".  And the whole field of poetry is: "Dichtung". Which in second meaning is also the word for seals.
- Dorothee

"I was trying to translate the poem in Albanian, and I was stuck ant the word "condense". My friends came up with a lot of words that describe some kind of "making" that requires skill, talent and hard word to give a unique, very personal product. Now that I read your post, it just stuck me again, I can't find the right word in my language, because there isn't one. We use the Greek word for poetry. Thanks for pointing this out, this is the reason why I love languages and I'd like to learn them all if it was possible. I do have to go back to German though, started twice and stopped to go back to the Latin languages..."
- Mirela

"I love this! Part of the joy of poetry is learning new things as we try figure out what on earth the poet was trying to say. I'll add checking on the origin of words from now on when I run into the use of a word that doesn't seem quite right or maybe too obvious in English.
The other connection to German here may be the admonition by Grandfather to learn a trade. I live in the Texas Hill Country where there was a significant German immigration and these were successful and prosperous folks, mostly tradesman, craftsman, shopkeepers, who came to America to make their fortune. They are still known as industrious, hardworking, and successful folk here because they came originally with "a trade." LOL
On the poem itself - I think it is a kind of tongue in cheek retort to perhaps an overbearing grandfather and also a comment on how much "noise" there is out in the world and how a poet will always have a job in trying to clear away the static to make things clearer;)"
- Rose Marie

"That's so cool! Thank you, Dorothee, that's a little tidbit of information I'd never have stumbled upon on my own. - I love etymology; a quick origin study can bring such unexpected depth to words we otherwise wouldn't have given a second thought."
- Christina

"I almost didn't stumble upon it, either :) - i guess it's all the close reading that made me look at the word "Dichter" and see the different, original meaning.
And now i just looked up "Poetry". It's derived from Greek and relates to "making", here's the wiki explanation: "Poetry (from the Greek poiesis — ποίησις — with a broad meaning of a "making", seen also in such terms as "hemopoiesis"; more narrowly, the making of poetry) is a form of literary art which uses the aesthetic qualities of language to evoke meanings in addition to, or in place of, the prosaic ostensible meaning."
- Dorothee

"A very good point. Ezra Pound wrote about those German words in his book "ABC of Reading"...It's all about condensation.. Nice!"
- Olimpia "

"That's so fascinating. I didn't know that and just looked for a quote, found the passage online. So maybe Niedecker's poem could also be relating to the lines of Ezra Pound (copy below)?"
- Dorothee

*
From ABC of Reading by Ezra Pound

1 ‘Great literature is simply language charged with meaning to the utmost possible degree.’ Dichten = condensare. I begin with poetry because it is the most concentrated form of verbal expression. Basil Bunting, fumbling about with a German-Italian dictionary, found that this idea of poetry as concentration is as old almost as the German language. ‘Dichten’ is the German verb corresponding to the noun ‘Dichtung’ meaning poetry, and the lexicographer has rendered it by the Italian verb meaning ‘to condense’.
*

"If that is correct that is a great observation - it would link in to both: the condenser/condensery comments, and the grandfather if I am correct in my assumption that Niedecker is a germanic name"
- Peter

"Very cool. That makes me wonder if maybe her grandfather spoke German."
- Stephanie

"Peter, Stephanie: I wondered about the same thing - Niedecker is a German family name. I looked for hints in her biography, but the online versions don't really tell much about the roots of the family."
- Dorothee

"I saw in a reliable blog that in the same chapter ("dichten-condensare") Pound mentions a question addressed to a Japanese student -- "what is the difference between prose and poetry" -- to which the student answered “– Poetry consists of gists and piths."
- Olimpia

"Why would poems be considered "condensations?" I wonder. Are they shorter than prose works? Walt Whitman's poem, for example, was immense and sprawling; other poems, such as epic poetry (Beowulf, the Odyssey), can take hundreds of pages. Other poems, however, such as Martial's epigrams, are in fact quite condensed (2 lines!). I guess that poetry was once thought of as shorter and more "pithy," but that definition has greatly changed. It is quite useful in this particular poem, however."
- Sarah

"Hey, Sarah (and everybody) - you brought a quite interesting point of view... And you did chose such good examples But I find myself wondering about the difference between "length" and "condensery"... ...maybe a poem can be immense and, at the same time have every word, every sentence, so precise and full of meaning… Like in the Odyssey, considered by many to be just perfect. If we borrow the Ezra Pound quotation Dorothee mentioned above "Great literature is simply language charged with meaning to the utmost possible degree." I think this sentence applies to the use of language, not to the size of the poem .."
- Olimpia

(link to the original forum post, you have to be enrolled to be able to visit the forums)
Posted by Dorothee at 5:58 PM