Graphic Novels of the Dickens, Steampunk and Alpine kind + NY poets (or: what are you reading?)

this blog post is inspired by the blog series "It's Monday! What are you reading?" which is hosted by Sheila at Book Journey. more about that, at the bottom of this post 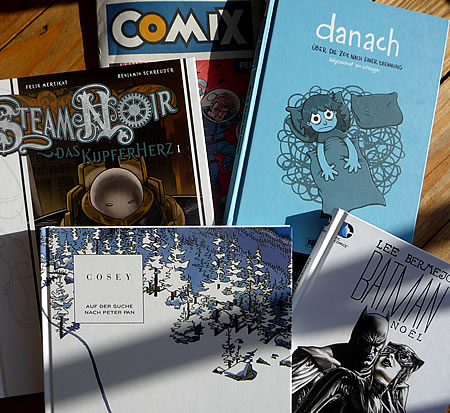 From Noble Literature to ... Comics.
Last week: Noble Literature, induced by the Frankfurt Book Fair - as in: "Words, Wars, Books, Peace Prizes, Time, Beats, etc.
This week: Comics! Induced by the Comic Fair in Essen city. The nice thing is that i received a couple of comics there, and had the chance to thumb into some graphic novels i didn't know yet. Following that theme, my reads this week are comics and graphic novels - and also, NY poets:

Noel, or: Charles Dickens goes Batman
Just in tune with the upcoming Christmas Season, "Noel" was released here in Germany - i read it on Sunday, and was amazed by it. Great graphics, but even more so: great story, which is inspired by Charles Dickens' classic "A Christmas Carol", but with a modern set of characters. The main character is Batman, only that he isn't your helpful superhero in this story but rather the Dark Knight he has turned into in his recent movies and comic stories, scarred by his past and his fight against villains. So: Batman = Scrooge. The equation feels twisted at first, but  works painfully well and leads to uncomfortable reflections: if you deal with villains, how much darkness and cynicism rubs onto your own self in time? The strong contrasts of light and dark in the images, in this case it's a counterpart to the merge of good and bad in the characters. This book  was a #1 New York Times Bestseller. For a peek into it, try this link: Batman Noel

In Search of Peter Pan
I hadn't heard of this book before, and it was both the alpine cover and the title that made me curious. "In Search of Peter Pan" tells a story from the Swiss Alps - the region that is home to the author, Cosey, who favours "realistic comics". Set in the 1930ies, the book weaves together stunning landscapes, the history of the region, and the story of an author looking for inspiration in a narrative that leads from a small mountain village in the Wallis to a glacier that is about to crack to the Aosta valley in Italy. This story was originally serialized in the French magazine "Tintin" in 1983/184. The english edition has the title "Lost in the Alps" and comes in 2 parts. Here's a bit more about the author + artist Cosey and his bio + books (with screenshots)

Comic artists live
The great thing at the Comic Fair is that there are several artists from different countries, drawing live at the fair. You can stand and watch a white page turn into a comic sketch. It's a kind of magic. 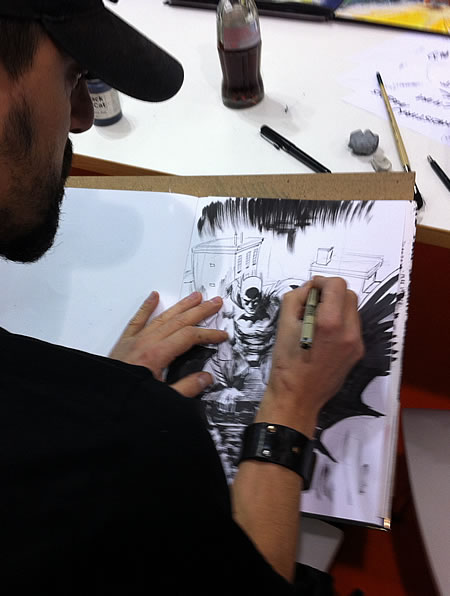 Danach + Steam Noir
The next 2 graphic novels are from German artists, and both also connect to the book fair last week: "Danach" is a non-fictional work, it actually is the thesis of a student, and explores the different ways people take to deal with the end of a relationship. It's not really common to pick the form of a comic for ones thesis, but there have been a couple of comics that developed that way.

And finally: "Steam Noir" - it received the Comic Award for "Best National Comic Book"  It's a steampunk story, here's the definition (which i wanted to look up since ages): "Steampunk is a sub-genre of science fiction that typically features steam-powered machinery, especially in a setting inspired by industrialized Western civilization during the 19th century." (more)

The steampunk approach blended right in with the region there, here's a photo from one of the old mines that the region around Essen is famous for - the nice thing is that i got to see a bit of the region, a photo travelogue is online here: Comic Coal Metropolis, or: short trip photos from the Ruhr Region 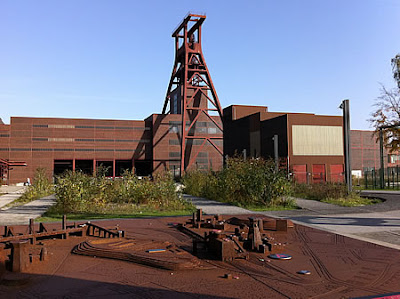 A bit more about the Comic nominations and award winners that were announced at the Frankfurt Book Fair, here: Comics Beat / Frankfurt 2012 Awards (i already ordered another of them, Habibi by Craig Thompson, set in Morocco - which i also saw in Essen, yet it was definitely to thick to carry  along with its 672 pages)

...and as non-graphic counterpart: the New York School of Poets
Despite the fair trips, i still continue the "ModPo" Modern Poetry online class, which is moving to the “New York School Poets” this week. Yesterday i listened to Al Filreis’ audio introduction, and his excitement is contagious. The audio introduction is 30 minutes, and includes 2 poems by John Ashbery already – which is continued in the chapter with Ashbery’s “Instruction Manual” – a mind journey from an office that makes him daydream of Guadalajara, Mexico – and made me think of my own fragmented trip to the Ruhr region, where i tiptoed from the fair to catch some of the tunes of the region, which now seemingly reflects in those lines:

“Let us take this opportunity
to tiptoe into one of the side streets.
..
How limited, but how complete withal,
has been our experience of Guadalajara.”

Previous reading blog entries are collected here: bookshelf + monday reads. there also is a visual bookshelf, just click it to get there:

Some lines about me: I'm into roads, stories, places, crossings, and all the things they lead and connect to. I edit BluePrintReview and the blueprint book + lit blog. Apart from being an editor and blogger, I am also an author myself. My new book Worlds Apart launched some weeks ago:

Worlds Apart: the true story of 2 friends, 2 journeys, and 10 life lessons
In the global world, a traveler from Europe and a teacher from Asia meet in the web, share their journeys, and the joys, longings, and life lessons that wait along the road. Captured in letters and photos that reach from China and India to Germany and Spain, a dialogue across continents and cultures unfolds: Worl(d)s Apart

Wow you set that up amazingly. Thank you for the comment!!! Happy reading!!!

:) Thanks. For me, the blog posts are both about sharing, but also about processing the week - especially the last 2 weeks with the trip to the book fair and then the comic fair were so full of impressions and sights and different books and themes that my head was spinning at the end of each day.

The books you are reading sound like good books! I will have to check them out.