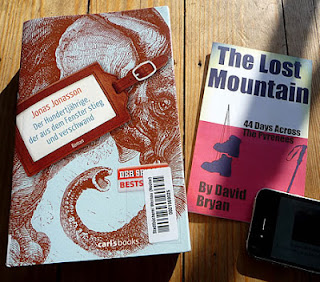 Book joy is...
....when you walk into the local library and on the shelf of the "new books", see a book that you remember, even when you aren't sure who told you about it, or where you read about it. So you pick it up, and read into it, and enjoy the story, and then - after the first chapter - finally you remember where you first read about it: in a book blog from the other side of the world. That's exactly how i arrvied at... 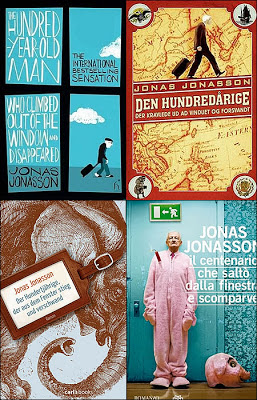 The first time i saw the book, it looked very different - the english edition has a blue cover, and the elephant that is part of the storyline doesn't show on the cover. I am just glad the German edition doesn't have the Spanish cover, i guess i wouldn't have recognized the book then - even though the title is memorable, of course. For the fun of it, here's a cover collage, combined with the reading note from the Wordsmith blog - set in India, this is the review that i remembered without being to place it when at the library:

”I have rarely enjoyed a book as much as I did this one - in a true comic sense. Yet, if I have to think too much, and that kind of thinking comes much too easily for me, then I would say that in reading about Allan Karlsson's life, there is a fair bit to learn from. Don't take life too seriously - and there is nothing in the world that can't be washed away with some good food and vodka. Who can argue against that? Throw in some great friends, and an elephant and you are set for life, even if you are hundred years old. Or perhaps that's what makes you live to one hundred years old.”

And a life quote from the book: "Things are what they are, and whatever will be, will be.”

The Lost Mountain: 44 Days Across the Pyrenees
My second read is the complete counterpart to the recommended-beststeller-novel: it's a chanced-upon-autobiographic-ebook. Also, it is the next in the unplanned series of "long-distance" walk books. After "Hartland - walking through America" by Wolfgang Büscher (review link) + "Journey to Ki", the Tibetan travelogue by Simon Wernell (review link), which followed the trail books from last year: Wild by Cheryl Strayed and A Walk in the Woods by Bill Bryson. (i should put a trail post together at some point..)

So now: walking through the Pyrenees. It's a region i've been to myself, as part of a road trips to the South of France. Here's a photo from a drive into the Pyrenees: 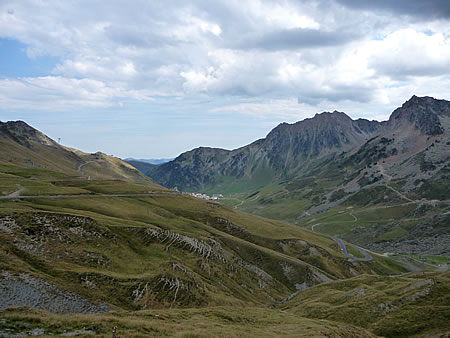 I don't really know that much about the region, though. And the lines of the book description, they made me both think of my own time there, and of this mood of the 100-year-book: this stepping out of the window of the everyday, into the unknown. Here's the book description:


"In early August 2008 David Bryan, having become unbearably bored of his monotonous office life, set out on an ambitious and perhaps naive journey to walk the entire mountain range of the Pyrenees from their starting point at Cape Higer on the Atlantic coast to the finishing point, 500 miles away at Cape de Creus on the Mediterranean.
Utterly inexperienced and unfamiliar with the terrain, culture and language, he quickly finds trouble in the form of severe storms, wild dogs, and dehydration. He is saved only by learning quickly and the company of some colourful and humorous characters he meets along the way."

David Bryan captured his trail experience in this brief but vast read of about 150 pages, and takes you with him up there into the wilderness, where the focus of life both opens into vastness, and turns to the main necessities of life: where to find water, how to not loose track, where to sleep. He walks alone, but finds companions along the way for parts of his trail. The book includes a wonderful, returning Freudian slip: when David Bryan wonders about something, he wanders - which made me think of the classic quote: "Solvitur ambulando" - "It's solved by walking". And so he walks on, for 44 days, through hard rain and days of burning sun, through encounters of wild dogs and life questions, through happiness and fear, across the Lost Mountain. Here's the e-book at amazon: The Lost Mountain

2 quotes from the book: "We talked for hours about our journeys, through life as well as the Pyrenees. I realised now that if they walked with such purpose for such personal goals, then the reason behind my walk was not as ridiculous as I had feared a week ago."

“I should have spent every day trying to understand the world instead of own it. Money, toys cars and phones, were not what I was searching for, and so the quest for them had only ever made me miserable. The rush hour, the half hour dinner breaks, all I ever wanted was to be free and live in peace.”

NEXT READS:
From mountains to islands, from Sweden to Poland, and from 2 male authors to 2 female authors... here are the books i plan to read this week, more about them, next monday: & "Marzi" - Marzena Sowa's memoir of growing up in Communist Poland,
told in episodes that are put into text and images by Sylvain Savoia

This blog post is inspired by the blog series "It's Monday! What are you reading?" which is hosted by Sheila at Book Journey. participating blogs are listed in this Linky Book List

I'm so glad you enjoyed The 100 Year old Man. :) Such a great read! I recently read and reviewed Historia, Historia. I hope you enjoy it as much as I did.

Have a great week!

hi Jennifer, wow that's such coincidence about Historia, Historia, as it was just released and is a small press book - i will go looking for your review on it.