reading from Chile to Paris to Romania with Gabriel Garcia Marquez, Milan Kundera & Herta Müller, or: home, exile, and fiction

The books I read this week... were chance reads, brought by the phone book box again. After the luck I had there with books the previous times (finding "The Lake" by Banana Yoshimoto, and an old diary, here's more), I stopped there again - and again was lucky. This time, Gabriela Garcia Marquez and Milan Kundera waited there: 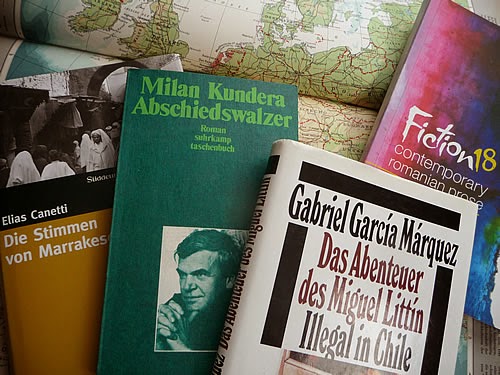 Gabriel García Márquez -  Colombia / Chile
In the past, I tried to read Gabriel García Márquez's novel "100 Years of Solitude" several times, but unfortunately never got into it. The book that I brought from the box, about Chile, is a modern reportage: Littin is a film-maker, and exiled from Chile, but returned there illegally to create a film. In a different kind of "making of" story, Marquez spent several days, talking with Littín to "hear the story of his escapade, with all its scary, comic, and not-a-little surreal ups and downs. Then, applying the same unequaled gifts that had already gained him a Nobel Prize, García Márquez wrote it down. "Clandestine in Chile" is a true-life adventure story and a classic of modern reportage."

It's both a sad and powerful read, and the fact that there are too many totaliarian countries in this world, with citizens who live in fear of their own government makes it a painfully global read. There's more about the book here at goodreads.

Marquez himself is from Colombia, and while reading the book, looking for a more typical writing from him, I arrived at this magical reality short story: “The Handsomest Drowned Man in the World”

Parallel to those reads, I also read an interview with Gabriel Garcia Marquez in the Paris Review, which was a perfect combination to read. So glad I picked up the Chile book, and finally arrived at Marquez and his work. He is a wonderful, thoughtful and surprising writer. Here's a bit from the interview, on the theme of fiction and journalism:


Interviewer: "Since we’ve started talking about journalism, how does it feel being a journalist again, after having written novels for so long? .... Do you think the novel can do certain things that journalism can’t?"
Marquez: "Nothing. I don’t think there is any difference. The sources are the same, the material is the same, the resources and the language are the same." ... "What I would really like to do is a piece of journalism which is completely true and real, but which sounds as fantastic as One Hundred Years of Solitude. The more I live and remember things from the past, the more I think that literature and journalism are closely related."

Milan Kundera: Czechoslovakia / Paris
From exile story to exile story: after reading the Chile book, I tried Kundera and the "Abschiedswalzer", hoping that it would be a bit like the book he is most known for, "The Unbearable Lightness of Being", and after some pages, realized I looked for that Lightness... and so went and browsed my bookshelf. Couldn't find it, so I looked for an interview: A Talk with Milan Kundera. Like Littin, the film-maker from Chile, Kundera choose to go to France when he had to leave his home country. And in one of those good twists, the interview starts with an intro that mentions, of all authors, Garcia Marquez:


In the 1980's, Milan Kundera has done for his native Czechoslovakia what Gabriel Garcia Marquez did for Latin America in the 1960's and Aleksandr Solzhenitsyn did for Russia in the 1970's. He has brought Eastern Europe to the attention of the Western reading public, and he has done so with insights that are universal in their appeal. After the Soviet invasion of Czechoslovakia, Kundera lost his position as a professor at the Institute for Advanced Cinematographic Studies in Prague, and his books were banned. Little by little, life was made unbearable for him, and he was hounded out of his native country. His call for truth and the inner freedom without which truth cannot be recognized, his realization that in seeking truth we must be prepared to come to terms with death - these are the themes that have earned him critical acclaim.

So I guess, it would be a good follow-up to this story chain to now go and look for Aleksandr Solzhenitsyn at some point. Or maybe he will pop up in the phone box?

And following the theme of exile, while looking for online reads from Kundera, I arrived at this story excerpt from another of his novels, "Ignorance", which focuses on leaving and the longing for places left:


Ignorance By Milan Kundera / From Chapter 2:The Greek word for "return" is nostos. Algos means "suffering." So nostalgia is the suffering caused by an unappeased yearning to return. To express that fundamental notion most Europeans can utilize a word derived from the Greek (nostalgia, nostalgie) as well as other words with roots in their national languages: añoranza, say the Spaniards; saudade, say the Portuguese. In each language these words have a different semantic nuance. Often they mean only the sadness caused by the impossibility of returning to one's country: a longing for country, for home. What in English is called "homesickness." Or in German: Heimweh. In Dutch: heimwee.

The German "Heimweh", literally translated, it means "Home-ache". The counterpart of it is: "Fernweh" - "far-ache", or "distance-ache".

While browsing my bookshelf, I had a long look at his old map - in it, Yugoslavia is still one country, just like Czechoslovakia and Russia, while Germany was two countries.... 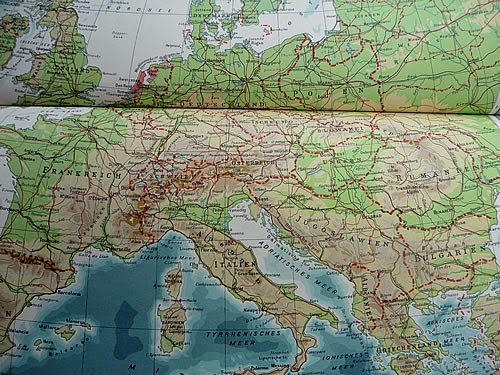 ... and I arrived at 2 other books that also connect to theme exil and home, and to this series of world reads:

Canetti: Marocco / Switzerland / England
"Marocco" by Elias Canettti is a book I read several years ago. Back then, I also read about Canetti's biography: Elias Canetti was born in Bulgaria, in his childhood the family moved to Austria. In 1938, Canetti and his wife migrated to England as a reaction to the nationalist turn of Germany and Austria. 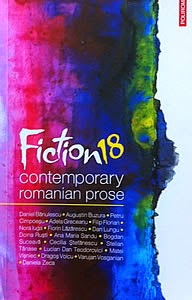 This is an anthology from the book fair, from the Romanian booth, it features 18 contemporary Romanian authors and their new works, with excerpts from each included. The first story, by Daniel Banulescu, needs just 3 lines to take the reader right back into totalitarian Romania: "In 1981, Nicolae Ceausescu built himself a holiday palace on Lake Snagov. Shortly after the President began spending his Saturdays, Sundays and some weekday afternoons in his palace at Snagov, the lidos along the entire shoreline of the lake thinned out and then disappeared. The restaurants in the vicinity of the palace were closed down..." (story link)

So good to see that the Romanian authors are now free to write and express their stories and experiences. And I just saw that there is a website with the authors and excerpts: Romania Writers

Reading in the book made me also think of Herta Müller, who grew up in Romania and wrote despite her fear of the government, and the consequences their words could have for her - more about that in the previous blog posts about her: Herta Müller - and here are some quotes from her, on the theme of oppresssion and home country:


“I have packed myself into silence so deeply and for so long that I can never unpack myself using words. When I speak, I only pack myself a little differently.”

“If only the right person would have to leave, everyone else would be able to stay in the country.”

“They have good streets here, but everything's so spread out. I am not used to asphalt, it makes my feet hurt, and my brain. I get as tired here in a day as I do back home in a year. That's not home, other people live there now, I wrote to Mother. Home is where you are now... And Mother wrote back to me: How would you know where home is? The place where Toni the clockmaker tends the graves, that's home.”  (link) 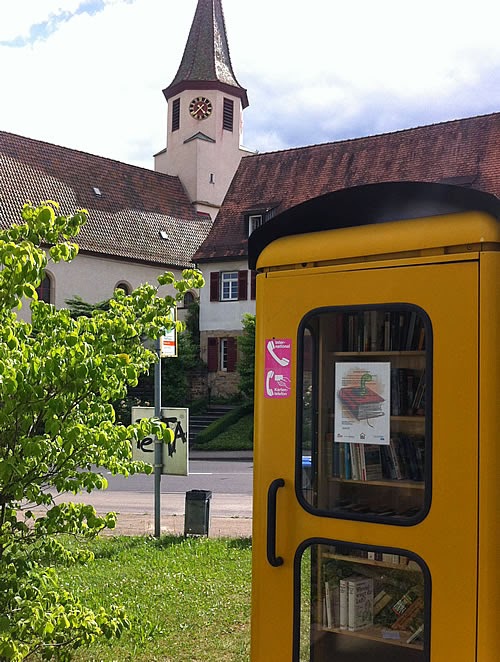 For 2014, i didn't join a specific reading challenge, but i try to read books / authors from different countries and continents, and this summer I am focusing on short stories.
Here’s more about it: Reading the world

On the left is a photo of the book phone box, it feels a bit like a magic shelf. So far, I always found books there that I didn't even know about, and that I really enjoyed.

Other book blogs: It's Monday! What are you reading?