sundogs in the neighbourhood 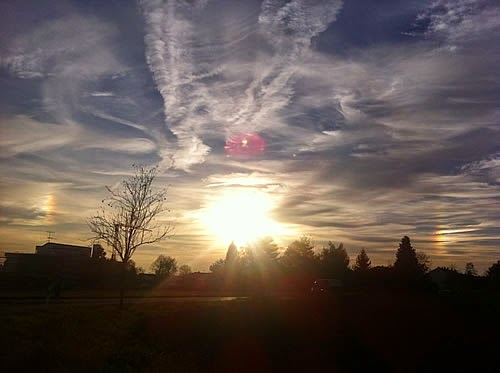 Last week, I was on the way back home when I spotted this sky phenomenon: a halo around the sun. Also called "Sundogs". It looked unreal, and remained there for some minutes. I parked in the next possible spot to catch the picture. There also is a larger version of the photo online.

This happened about 5 minutes from where I live: a sky miracle directly in the neighbourhood.

Here's more about the sun dogs:


Sun dogs, also called mock suns or phantom suns (scientific name: parhelia / singular parhelion), are "an atmospheric phenomenon that consists of a pair of bright spots on either side on the sun, often co-occurring with a luminous ring known as a 22° halo. Sun dogs are a member of a large family of halos, created by light interacting with ice crystals in the atmosphere. (More here: wiki/Sundog)

Such a surprise. Earlier this year, I already spotted my first-ever sky halo, one that looks like a rainbow-colored cloud: a "Circumhorizontal Arc". While figuring out what the cloud was, I learned about the types of halos, so this time at least I knew that this was a natural phenomenon.

Here's the photo of the Circumhorizontal Arc: 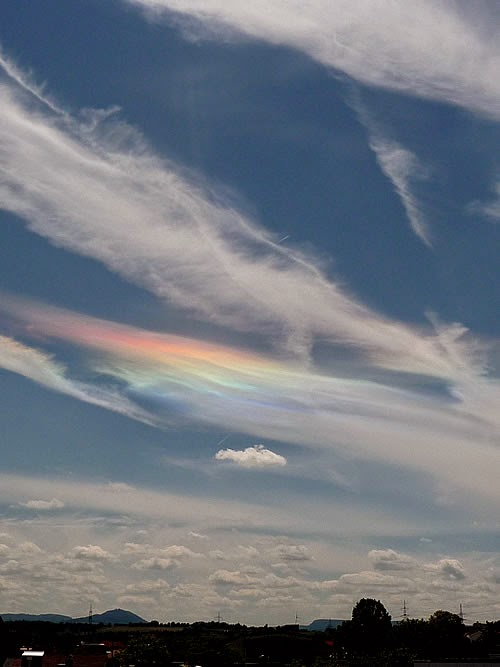 I'd never heard of "sundogs" before but now that I have I'll know to look for the phenomenon. beautiful photos! you really captured it well. :)

thanks! i am still excited about seeing and catching them. And just noticed that i got the term wrong in sky friday, and typed "sky dogs" there :)

Very cool. Glad you could capture them. I've only seen them on rare occasions, so this is a treat!

It been fairly cloudy in North Idaho been finely it's clearing off.

I love the sundogs, gorgeous sky and captures. Have a happy weekend!

I've never seen either except in photos. Beautiful.

yes, it's a treat to see them! i've never seen them before either, hadn't even known about them. so fascinating, what the air and some ice particles can do.

Nice picture. I really like seeing these kinds of things - not that it happens very often!

Thanks for the feedback, and glad you enjoyed the sundog-moment. Would be nice if they happened more often :)