this blog post is inspired by the blog series "It's Monday! What are you reading?" which is hosted by Sheila at Book Journey. more about that, at the bottom of this post. 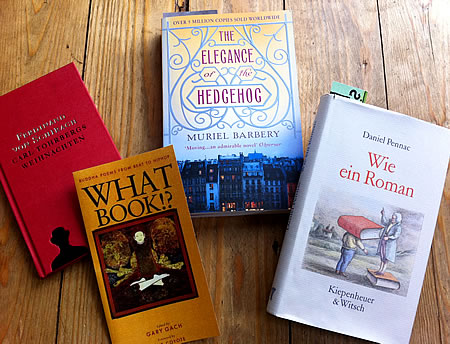 Paris, or: The Elegance of the Hedgehog..
..is a longtime bestseller in France, set in Paris and written by Muriel Barbery. The book was published in 2007, it so far sold over 5 million copies worldwide. The Booklist review includes a disclaimer that made me curious for it: "A critical success in France, the novel may strike a different chord with some readers in the U.S. The plot thins at moments and is supplanted with philosophical discourse.."
For me, i enjoyed the starting chapters, but then almost gave up when the plot indeed kept stretching, and the characters got lost in discourse and prejudices (which may be intended: this feeling of stuckness that the reader experiences there, together with the characters). and i'm glad i stayed with it. the second half is stronger, more vivid, and lets the characters find their way into a more open atmosphere: connection instead of isolation, the simple joys of life instead of abstract philosophy.
(& an addition: the novel has been turned into a film, here's the Hedgehog trailer, which gives an idea of the mood of the novel, too)

The reason i picked the "Hedgehog"..
With the new year, the new book challenges are starting, and for the "Around the World in 12 books" challenge, January leads to France. and so i browsed several book lists in December, and arrived at the "Hedgehog".

Like a novel ("Wie ein Roman")
With the turning of years, i also re-sorted my bookshelf, and came across some books that still wait to be read. One of them is a book on books: "Like a novel" by Daniel Pennac. After enjoying the recent books-on-books i read, "Ex Libris", I opened this one at random, started to read, and now read it from middle to end, and then from start to middle. (true). sadly, the book isn't translated into English yet - Pennac is a french author, i learned after reading half of it. So this book also fits into the "January = France" category.

What Book!?
And now a very different book-story, with some book-searching-and-finding included. In December, my editor&publisher Jessi Graustein blogged about a book discovery: all the books she so far has published have the theme of "Home" running through the manuscript (here's her blog note: Subconscious Drive (of Home). Reading this, i remembered a modern Buddhist tale in once received in a mail, which also was about home. Back then i tried to find the author, but to no avail. So i looked for the mail, and then tried again, copying the first line of the story into google: "Last fall the Dalai Lama came to New York City to do a two-week ceremony called the Kalachakra which is a prayer to heal the earth."

Learning by Doing: Google Full Text Search Options
And now, surprise: Google came up with the full story. in Google Books. i hadn't known that this is possible, and it's both exciting and a bit scary: you can now search for poems and short stories or passages and paragraphs in an extensive full text search.

The comical thing that i first didn't get was the statement that came up, though: Google Doc said in the sidebar: "What Book!?"...

...which actually is the title of the book: a collection of Buddha Poems, also available as e-book. i ordered the e-book. it's quite a find, with poems written by Japanese monks as well as by international guests of retreats - including Yoko Ono.

Here's the screenshot and link of my search&find: "Google Docs: What Book!? Buddha Poems"

Carl Tohrbergers Christmas
The fourth book i read last week - is a subversive brief collection of 3 short stories, written by Ferdinand von Schirach, a judge who writes. 2 of the stories have the theme: what happens to a life when you mainly try to stick to the rules and expectations? the main character in the longest story is.. a judge. And now i just  checked: his books have been translated into English, here's his wiki page.

From France.. to Pakistan and into a Smalltown
After France, the next regional focus of my reading journey will move towards rather different places and formats: first, for the 7 continents reading challenge, is a Granta collection of Pakistan waiting, which also is my first Granta collection altogether. here's the link to the online version with some selected reads: Granta Archive "Pakistan". 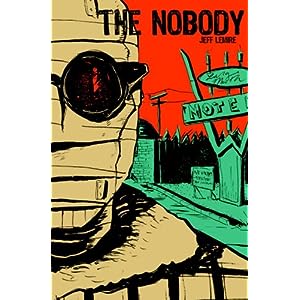 and i started to read a modern version of H.G. Wells classic "The Invisible Man": Jeff Lemire turned it into a smalltown graphic novel with the title "The Nobody" (if you are interested in graphic novels, i blogged about reading them here and here)

Good to know that about Google Books. I don't think they have caught on as yet, at least I haven't seen Google Books mentioned in blogs.

I didn't know that about Google Books..very interesting! I'm going to have to play around with that.

I hope you have a great week of reading!

I love seeing the back story of how you ended up reading a particular book. I seriously missed the experience of looking for a book to read after becoming a bit too immersed in the online World and seeing all the gushing about the latest and greatest new releases (i.e. books with huge marketing budgets).

How interesting! And I totally laughed at myself when I saw that "What Book?" is actually the title of a book, not just a blog post! :D

I've had The Elegance of the Hedgehog on my shelf for ages but I'm somewhat intimidated by it - it's the philosophical discourse parts that have me worried, I find that, depending on how it's written and what's being said, I can have a hard time staying interested and even understanding it. Too much like a textbook or something. So I'm not sure if I'll read it this month either.

I like the sound of Nobody, though I've never read The Invisible Man.

Google Books, it's a bit overwhelming to imagine the database they must have to run such full-text searches, and then to see the scanned pages online and be able to browse them.

and books... i love it when there's a story behind the book. and in the last months, my focus seems to shift a bit more towards not-so-recently-published books, maybe also as translations from other countries take a while anyway.

hi Shannon, your comment went online just when i posted mine :) - about "The Elegance of the Hedgehog", for me, i started to enjoy the book the moment i said: i won't really read it all, i will skip some pages, especially in the first half. the thing is, the philosophical discourse - as i understand it - partly is what keeps the 2 main characters from making the step to be more themselves, and connect with others, and they happily abandon that discourse themselves at some point. so i guess, you're free as reader to follow the example at an earlier point already :)

I hope you enjoyed your reads this week.
Thanks for stopping by my It's Monday! Post :)

I'll have to add your Paris books to a list I'm making for a friend who is moving there for the next 2-3 years.

Am glad you ended up enjoying The Elegance of the Hedgehog! I loved it :) Have a great reading week!