reading: When I fell from the Sky, Mountainfit, To the Lighthouse, to South Korea + The Fiction of Relationships

This blog post is inspired by the general joy of global reading, a blog series, a new online lit course and a reading challenge. More, at the bottom of this post. 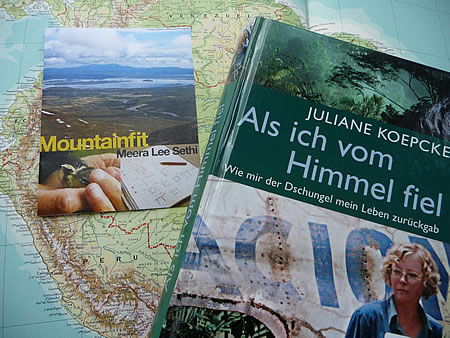 Library books and suggested reads, city and jungle, early reader copies and classic free e-books: this week's reads lead from Peru to Sweden, and from remote bird observatories to megacities

When I Fell from the Sky by Juliane Koepcke
Maybe you remember the story of the plane accident in Peru in the 70ies - the plane got hit by lightning, and with only one person surviving: a 17-year old girl who made it out of the jungle back to civilzation. There were multiple versions of her stories in the news, from "miracle girl" to "jungle hell survivor".

Now she finally wrote her biography. She is German, and i read the original version, but the book is also translated into English with an identical title: "When I Fell From the Sky"

What is special about her: her parents were scientists who explored a part of the Peru rain forest. Her mother was an expert for birds. During the field studies of her parents, they all lived in a hut in the jungle. The jungle: it wasn't hell for her, but a partly familiar environment. 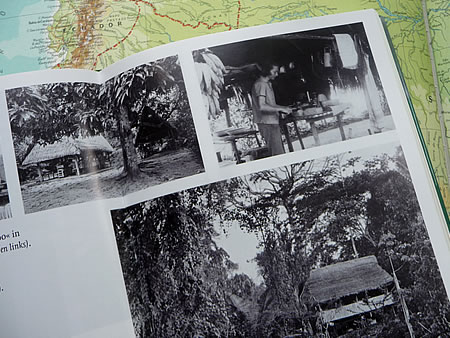 In the book, she reflects the time of childhood, the time before and after the accident. The accident herself id only 2 chapters in the book - her mother was with her in the airplane, but the girl’s seat was catapulted far from all others, and she almost magically survived the impact of the fall, probably due to up-winds and to the dense rainforest that slowed her fall. Everything changed after the day for her. But she turned into a nature scientist, too. Here's the description:


"Having spent a few years in the jungle during her youth, she was able to use the knowledge she had accumulated to survive, and, after an 11-day trek, she stumbled into the camp of three forest workers and was saved. Koepcke later followed in her parents' footsteps to become a zoologist, dedicating her life to realizing their dream of creating a nature preserve in Panguana. Her memoir is a gripping account of a harrowing adventure and an inspiring life." - Publisher's Weekly

The book includes some photo pages, one with old photos from their home in the jungle, and new ones from a recent visit to Peru with photos of butterflies and birds in their habitat. The jungle, in the book it is contrasted by the media jungle Koepke finds herself in, one that keeps her wrapped for years. It's a thoughtful book, one that is both a story of a life, and an analysis of life after a tragedy that is pulled into public again and again. 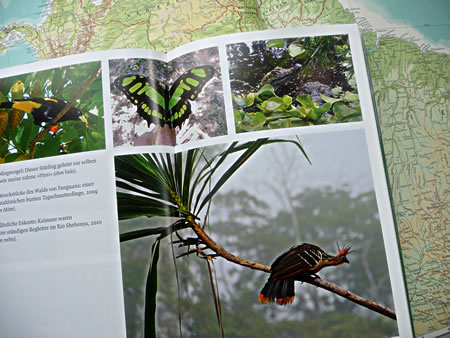 Mountainfit by Meera Lee Sethi
In almost perfect combination, I received an advance copy of a new book by CCLP, the indie publisher with the book about the Cape Verde islands that I recently read and enjoyed, the one that was part travelogue and part cultural documentary - here's more: Historia, Historia.

Following that definition, the new book by CCLP could be described as part travelogue and part ecological field notebook. Here’s the cover + description from the editor: "Our next release, Mountainfit, is by Meera Lee Sethi, and it releases June 10th.

This one’s got a bit of a scientific edge to it - A series of essays, memoir-style, about the author's summer as a volunteer in Sweden at Lake Ånnsjön Bird Observatory.... where Meera Lee Sethi found herself exactly where she wanted to be: watching great snipe court each other under the midnight sun and disturbing lemmings on her way to find a gyrfalcon nest.”

And here's the book at Goodreads: Mountainfit

The book will be released as e-book, and if you are interested in birds or nature, I highly recommend it. It'sa book that takes the reader along in an unknown landscape, one far away from the normal routes - a place with an own rhythm, reflected in 21 chapters, each with a slightly different angle and theme. Parallel to the nature theme, Mountainfit also includes reflections on language - here's one of the passages I bookmarked:

"I love the idea that the language of the birds holds secrets, and that if we understood it we would learn a great deal more about our whirling, teeming, extraordinary planet; and about ourselves. The question is, how do we listen, and what secrets do we expect to find?"


Reading it, I thought: Mountainfit, it's also a field guide to listening, to being out there.

The book also made me curious for this place of mountains and birds: the Lake Ånnsjön Bird Observatory. here's a collage from google image, and here are more images from there + here's the link to a bird blog i arrived at, from another visitor who spent 3 weeks at the observatory. 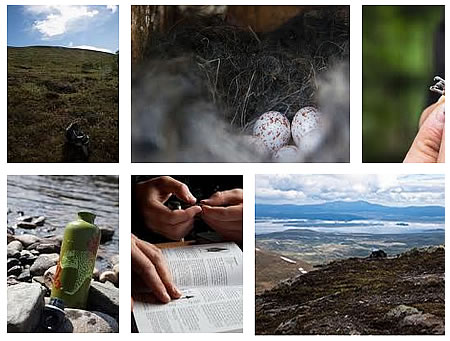 Into the wild...
The book also made me think of the nature books I read in the last year: "Deep Country" - also with a focus on bird watching, and Anne Dillard's Pilgrim at Tinker Creek, more about both in this book blog post: into the wild.

And now, a vast jump - from modern wilderness to classic reads and to the human condition:

The Fiction of Relationships
This week a new literary online course at Coursera: "What is the nature of our relationship to others and the world? How can literature help us see these relationships more clearly?"...  The first lectures are online already, and i am excited about this course - make sure to listen to the introduction notes: rather interesting reflection on literature as a study object. Here's more, including a reading list: The Fiction of Relationships.

For the course, I am currently reading 2 classics:

South Korea
And as a good counterpart, for the Around the World Reading Challenge, I am checking out books from / or set in South Korea. There's a book I read last year, set in Seoul, and an e-book I once downloaded which also happens to be set in South Korea:

More about those, in a seperate post later this month :)

Previous reading blog entries are collected here: bookshelf: currently  reading... there also is a visual bookshelf, just click it to get there.

Reading around the world - i really enjoy this literal discovery-tour of the world, and it now made me go and pull some useful links together in a blog post: Finding books by country: helpful links + resources

I wish I had joined the Books Around the World Challenge. I'm reading Brave New World by Aldous Huxley and Forever in Blue by Ann Brashares.

Hi Rose ~ you can also join the Around the World Challenge just for single months / countries, like South Korea now in June. "Brave New World" is a thought provoking classic, too.

To the Lighthouse looks really good. I hope you are enjoying it!
here is my Monday post