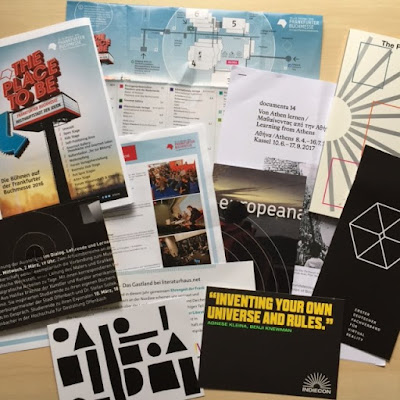 Themes + Snapshots
"Rain all day" - that's what the weather forecast promised for Thursday, the day I went to the Frankfurt Bookfair. "Hopefully they are wrong," I thought. As yes, the bookfair is mostly an in-door event, but they have this gorgeous central plaza. Which comes with an open stage, a reading-tent, and and a read-and-snack-area which basically is a breather between halls. With more than 7000 national and international exhibitors, the fair is the largest bookfair of the world. At some point, you long for that breather in between all the impressions and authors and highlights.

When I read through the infos for the 2016 bookfair last week, I learned that both the settings of the different areas of the fair and the fair concept itself has shifted: it now also includes an art section. And has more stages for themes. Their focus topics in 2016 are: Asia, Kids, Education, Art & Design, Self-Publishing, Weltempfang"/Global Reading,., here's more: Frankfurt Book Fair Themes

As a starter, here some photos and links, to give a feeling for the atmosphere. For more impressions, try the twitterstream: #fbm16  and #frankfurtbookfair 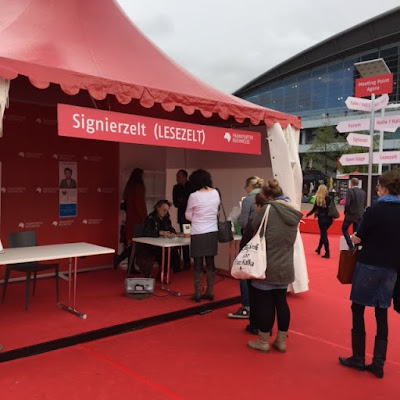 The author tent in the central plaza. The author who is signing in the photo is Connie Palmen, I read one of her books some years ago. 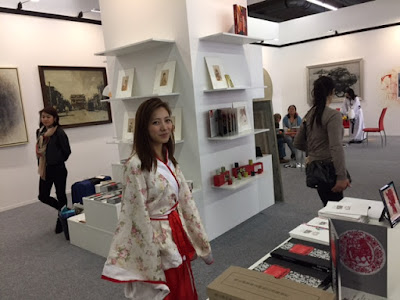 In one of the international halls. 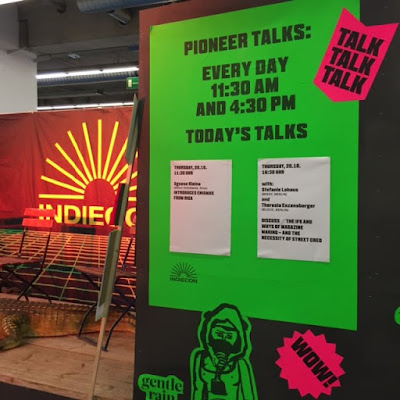 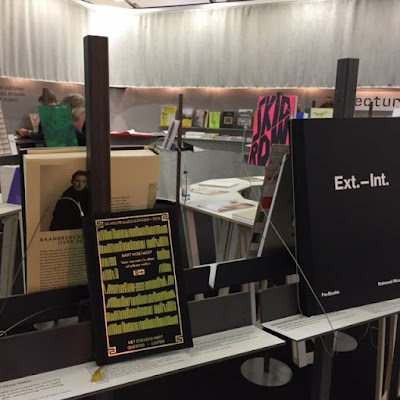 Books, books, and more books, in all kind of languages, about all kind of topics. The bookfair, in some ways, it is the world in miniature. 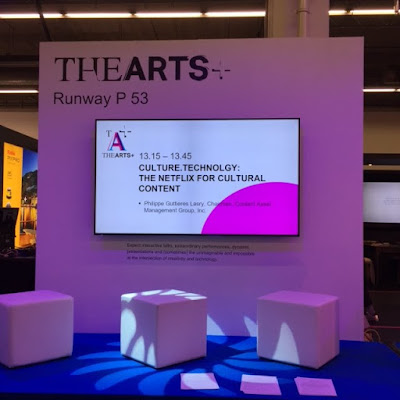 When I read through the infos for the 2016 bookfair last week, I learned that both the settings of the different areas of the fair and the fair concept itself has shifted: it now also includes an art section, a fair inside the fair, called: THE ARTS+

It's a vibrant and surprising hall, presenting current and upcoming art themes and events. The big eye-catcher was the XXL-book of artist David Hockney: 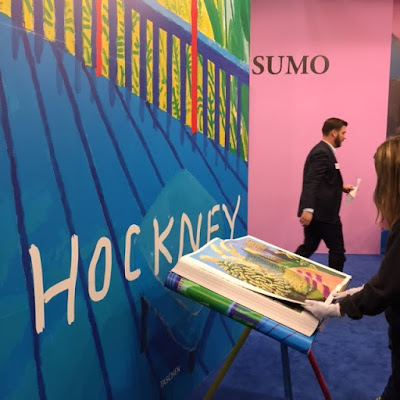 The upcoming documenta was part of the THEARTS+ program, they introduced a special art project: 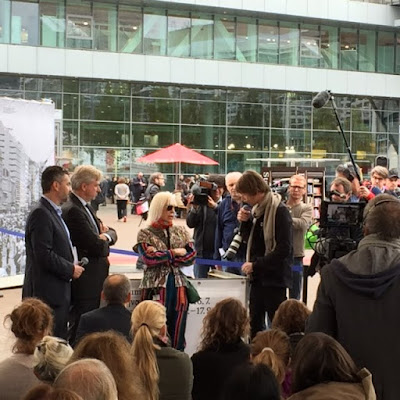 "The Parthenon of Books" is an art project that will be shown in 2017 in Kassel at the documenta, and which now officially gets started: The argentinian artist Marta Minujín is collecting books from forbidden and persecuted authors for it. For more about the documenta and the project, visit: documenta 14 / Athen / Kassel 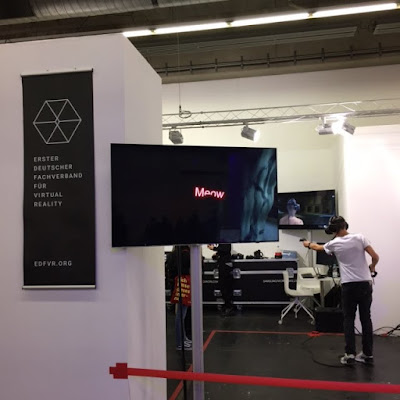 The Arts-fair encompasses both the future and the past: there's a multi media booth of the first VR-association: Erste deutsche Fachverband für Virtual Reality .... 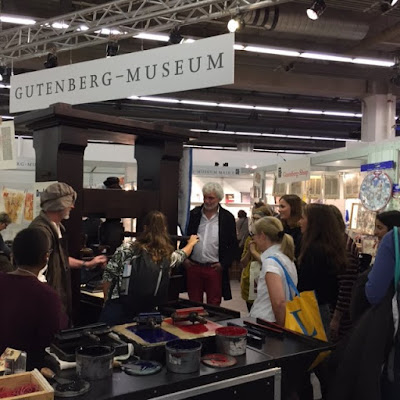 And just some steps from there, the Gutenberg-Museum leads back to the beginnings of printed books:

From print to the web: the international artists Olafur Eliasson and Ai Weiwei currently invite people to join "Moon", an interactive project that transcends borders set by nationality and language. 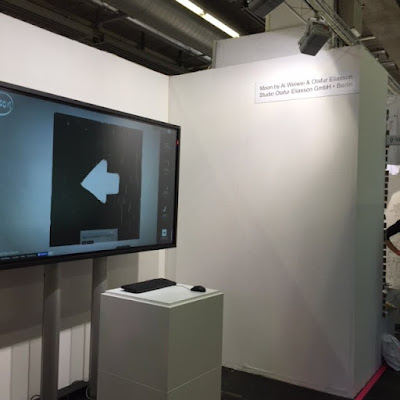 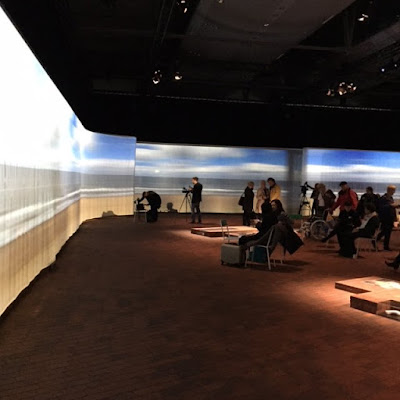 Guest of Honour:  Flanders + the Netherlands

This year, the guest of honour at the bookfair is Flandern & the Netherlands. With the slogan “Dit is wat we delen” (“This is what we share”), they will present not just novels, nonfiction and poetry, but also new forms that have emerged from the book arts, creative industry and other artistic fields.

The two countries developed an original idea for their presentation in the "Forum": 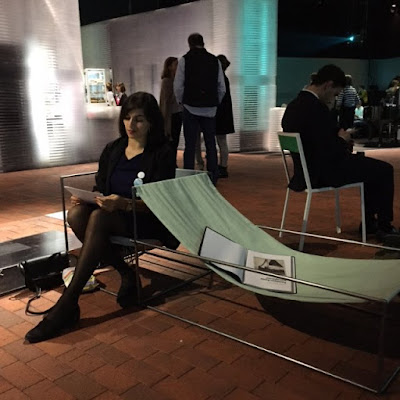 
As always, the guest country gets a hall to represent, and they turned it into an open, airy space with ocean bay atmosphere. So nice. They put up some loungers, and I was lucky and there was a free one – and the woman next to it on a chair welcomed me by the guest countries, and invited me to listen to poetry. Which she would read. Live. For me. Such a nice and different “exhibition”.

The poem she read was by Anneke Brassinga, here's the start:


BY THE SEA
The wind weighs the words
and finds them too light
the wind weeps, sweeps the words
aside, out of sight...

and here's the poem page: By The Sea 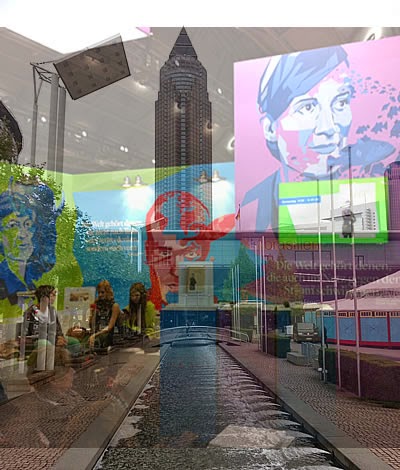 The bookfair, it is an extraordinary event anyway. For me, it was special in a different way this year: the last time I've been there was 2 years ago, in 2014. It was the last day of my "normal" life. Of course, as it goes with last normal days, you aren't aware of that while they happen. It was a sunny Thursday. One day later, on Friday evening, I discovered a lump in my breast. And hoped it wouldn't be what I thought it was, yet had a bad feeling from start. Which then got confirmed a bit later, and lead to a year of cancer treatments, and a long time of recovery.

So going to Frankfurt again, 2 years later, wasn't just about going to the book fair again. It also included this symbolic element of returning to a place that now carries a different kind of meaning for me.

Here's the memory of that bookfair day in 2014:
Frankfurt International Bookfair: Printed, Digital, We are Here - Snaphots & Links,

And here's the story of what happened afterwards: c is for cancer