Our Careers, or: a Conversation with S. Teri O’Type 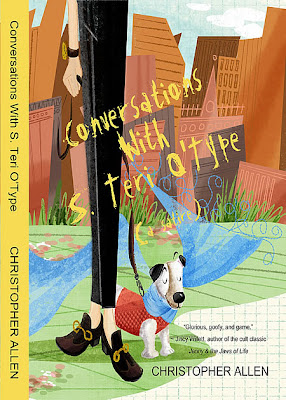 This is a first time, I think: today's blog post is an excerpt of "Conversations", the new (and also first) novel by fellow author Christopher Allen.

Chris sent an early reader copy of the book in August, and had me fallen for the first stereotype right away: with all his journeying and his blog I Must Be Off, i somehow expected a journey novel - and opened a satire instead. One that takes the reader on a mind trip: the story moves in subversive twists, and keeps playing with expectations and prejudices. In simple geographics, most of it takes place in an appartment in NYC, but the inner journey it holds for the main character Curt leads far beyond that:

On Monday, Kate Brown interviewed Chris in her blog, and noted:

"Towards the end of the novel your central character says: "The whole purpose of these lessons in Greater Gayness was to make me gay enough so that people would know it without my having to say it." - I'm fascinated by this line. I think it's very poignant and says so much, not just about gayness, but about our fear of having to explain who we are and how much more accepted we feel when we don't have to explain ourselves."

Of course, I didn't know about that when I suggested "Our Careers" for the blog excerpt, but it was a similar thought that stood out for me when reading the novel: the many layers of every person's identity, and how the layers that are visible on the outside often have a defining function, while so much is left hidden inside, invisible. Which leads to one of the themes that keeps fascinating me: the dilemma of the individuum in the modern society - on one side, there's the wish to belong, to be part of a group - and on the other side is the longing to stand out, to be recognized as an unique individual - but if possible, in a framework that is already established, just as Teri puts it in Careers:

“Something with the title Idol at the end,” Teri suggests. “Or America’s Next Top at the beginning.”

Enjoy the Careers read - And if you want, here's the link to the author interview in Kate's blog, which is both interesting and also a perfect extended introduction to the excerpt: Kate Brown interviews Christopher Allen, and here are some more thoughts on identity in an e-logue: Identity and the Crowd.

Our Careers
An excerpt from Conversations with S. Teri O’Type by Christopher Allen

Today, rushing straight from work, I didn’t have time to change into what Teri calls my gayer clothes. Originally, Teri and I were finally supposed to delve deeper into the topic “Cute little girlfriend does not a straight boy make,” but when Teri sees me in my wrinkled gray suit, he decides we’d better discuss “Our Careers.”

Granted, my suit needs pressing, but in its defense it’s a moderately priced, tasteful gray suit, the type any man in my profession might wear and have dry cleaned once every three years.

“It’s so sad,” Teri says and then spews for twenty minutes on what he calls “the vitality of gay vocation”—whatever that means. I try to take notes, but spewing is really hard to follow.

“What was that first part again?” I say when he comes up for air.

“Instinct, Curt! In. Stinct. A gay man knows where he fits, knows his place, knows his altitudes.”

“Um, do you mean aptitudes?”

For the next ten minutes I write feverishly. How was I to know I should have chosen a career in a creative field? Something heavy on glamour, light on responsibility, and way outside the gray spectrum—because according to Teri there’s no R in GAY. And I have to admit he’s right on that one.

“Something with the title Idol at the end,” Teri suggests. “Or America’s Next Top at the beginning.”

“Aw, that’s sweet. But, Eartha Kitt to Curt, gay men can’t count. And we certainly don’t aspire—aspire is a spiky word, don’t you think so, Cary Grant?—to be accounters.”

“My Lord!” Teri gasps. “I mean C-O-U-N-T is right there in the middle of the word. You must have known they’d make you count.”

“OK, Mr. Accounter, how many fingers am I holding up?”

Yes. For everyone out there: I’m sure I’m gay. I’m sexually attracted to men; therefore I am gay. And I don’t really know what the inability to count has to do with BEING gay.

“Marc, Marc, Marc,” Teri barks at Cary Grant, who rolls his eyes and lazily barks back:

“Marc is a luscious, sinewy man, but the moron can’t count to ten. He can count to eight because he’s a dancer. He’s a superb dancer. He chose a creative career, and he hosts three nights a week at Olive Garden because, despite his obvious sinewiness, he can’t make a living at dancing.”

“Oh no no no no! Don’t feel sorry for him!” Teri says. “He chose the career that expresses his inner queer with his entire, sinewy body. He’s as gay as he can sinuously be. He deserves respect with a capital Errrrrrrrr.” Teri growls at Cary Grant.

Apparently, although I’m giving it all I got, I am not yet as gay, or sinewy, or Rocky as I can be. Where did I go down the wrong career path? Maybe I should have majored in musical theater like Teri did. (He does a great impersonation of someone named Ethel Mormon.) I didn’t become an accounting major out of any particular affinity for figures. In fact, I think I just had a thing for my high-school accounting teacher. He was—

“There’s no people like show people!” Teri sings through his nose, which is stuck in The Village Voice. “They smile when they are low!” Teri looks up finally and smiles at me sadly, his eyes shifting toward the wall behind the Yucca plant and then back to me. It’s scary.

“What are you doing?” I ask, looking from Teri to the wall and back. “Besides singing and smiling like a shifty-eyed crazy man.”

Teri starts circling ads in The Village Voice, which Cary Grant is sitting on. “I’m finding you a new career path, blah-boy,” he says, concentrating on the ads. “Cary, you whore, stop sniffing the massage ‘therapist’ openings.”

“Aw, Curt.” He sighs as only he can. “You don’t have to live the lie anymore. It’s me: Teri, your gayru. I see you when you’re sleeping. I know when you’re awake.”

“But I don’t know anything about—”

“Oh, Curt. Just go into character. That’s what we do in the O’Type family. Oh! Oh! Be Anne Hathaway. She had a weight problem too!”

I know: I am the only person on the planet who doesn’t know who Anne Holloway is. It’s happening again: first Annie Lennox, now Anne Holloway. Is Ann a gay icon name?

“Hathaway, honey. Anne Hathaway? (Gollum. Gollum.) Darling, push all those awful numbers aside in that cute—yet horribly balding—head of yours—Have you never heard of minoxidil?—and think! Think! Think whacha tryin’ to do to me! Think!”

Cary Grant blinks at me as if to say, “I followed what Teri said just fine, despite its multiple embedded phrases and allusion to Lord of the Rings and Aretha Franklin.” Jack Russells are such arrogant little know-it-alls.

“Well, it’s the truth. Wait. Was Anne Hathaway in The Wizard of Oz?” I mean, my gay chances are pretty good with the W of O, right?

“Yes,” Teri says stonefaced (you’d think he’d be happier for my success). “She’s the one. Played the Wicked Witch.”

“Now let’s get down to gayness, shall we?” Teri pulls out his box of crayons. “How would you like to begin your application letter? I think you should go the self-taught artiste route and spell all your words wrong.” There’s a world of hope in Teri’s eyes.

“Excellenté!” he sings and starts scribbling my application letter to Tom Ford in carnation pink. Yes, I am as confused as you are. Who knew the Wicked Witch of the West had anything to do with designing Fords. 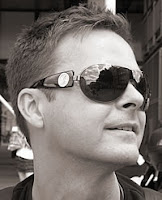 About the author and the book:
Christopher Allen is the author of Conversations with S. Teri O'Type (a Satire). His fiction and creative non-fiction have appeared in numerous journals and magazines both online and in print. In 2011 Allen was a finalist at Glimmer Train and a Pushcart Prize nominee.

Christopher is an editor, teacher and an obsessed traveller. He blogs at www.imustbeoff.com. For more about his book, visit: the Conversations blog tour
Posted by Dorothee at 9:56 AM

Love this! Christopher Allen is my "A" contributor buddy on Referential -- glad to see he's doing all of us "A's" proud :-)

Wonderful intro to this chapter, Dorothee. And great to read the chap again here. Enjoying the tour with Teri and Curt and Cary Grant.

Michelle, now i just saw you have a follow-up interview with Chris in your blog - just bookmarked it to read on the weekend, here's the link:

Thank you, Dorothee, for hosting this excerpt. And Michelle! Thank you for reading. I know you're so busy. You're the best!