This blog post is inspired by the reading challenge: 7 Continents, 7 Billion People, 7 Books - Reading Challenge 2013, more about both, at the bottom of this post. 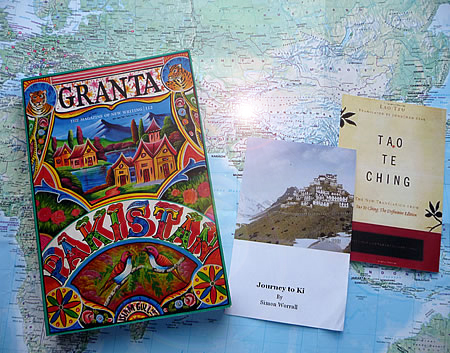 Into the Mountains....
The second task of the 7 Continents, 7 Billion People, 7 Books Reading challenge is to read a book from one of the 7 highest countries in the world, which are: Nepal, China, Pakistan, India, Bhutan, Tajikistan, Afghanistan

After checking the map, it's easy to see that all of those countries belong to the Himalaya region - and of course, it makes sense that the highest mountain range of the world is home to the highest countries. What I didn't expect, though, is to find 3 countries in this "highest" category also belong to the"most populated" category of the first challenge: China, India and Pakistan. Especially as high regions aren't synonym for comfortable living: the higher the region, the more difficult to live there.

More about the Himalaya region at Wikipedia, the page also includes this regional map of the Himalayas: ...to the highest village in the world
Now, where to head to with the next read? Looking at the list, a book recently read came to mind: Journey to Ki – a travel memoir from the Himalaya by Simon Worrall. It starts with these lines:


“I am on my way to the Tibetan Buddhist monastery of Ki. At 5.500 metres, it is the highest monastery in the world, and for two days, we have been climbing up the Sutley River valley towards the India-Tibet border."

For the reader who isn't sure how high 5.500 metres is, Worrall adds a comparison later in the book, in a sentence that leads from Tibet to Switzerland in 13 words: "Ki lies almost at the same height as the summit of the Matterhorn." And there are more world altitude references: on the way to Ki they pass a village named Kibber - the place their guide Tsewang, a 27-year old monk is from:


"At 4.205 meters, Kibber claims to be the highest village in the world connected by road, though several places in Peru and Bolivia may dispute the claim. We passed through Kibber on our way here and having seen the hungry, bedraggled children living there it was easy to imagine the kind of future that would have awaited Tsewang if he had not joined the monastery."

Life up there isn't romantic, and the contrast of the group of travelers who enters this higher regions to follow the trails of one of the first photographers who took a photo of Ki, and the people who live there is striking. The closer the travellers get to Ki, the more difficult it is to navigate the road, and the more difficult it is to eke out a living. The monastery itself is a fascinating and powerful, but also a physically demanding place to be: no warm water, no electricity, but the mountain wind waiting when you step out of the monastery rooms. Altogether, "Journey to Ki" is an e-book in brief novella length of about 50 pages, or rather, a longer travelogue. It both tells about cultural divides and encounters in the mountains. 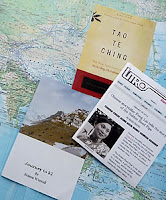 ...and into China
A very different mountain read recently went online at Litro Magazine: a traditional folk tale from the Chinese mountains, told by a Chinese author, not in written words, but in a podcast, with song parts included: Chinese storyteller and musician Fong Liu tells a tale called “The Golden Reed Pipe”, it's a traditional folk tale of the Yao culture, an ethnic minority who live in the mountains of southern China. Here's the podcast link - ancient tales in modern technology: “The Golden Reed Pipe".

While listening, i searched my photo files for a photo i took when i was trekking through the mountains of Vietnam, guided by a woman who belonged to one of the ethnic minorities, too - and who pointed to the mountains at the horizon, and explained: "Beyond those hills: China." 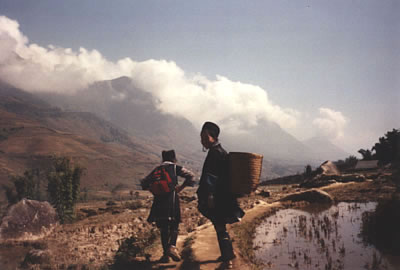 
"The wise man is one who, knows, what he does not know.”

For more, try the Goodreads quote page, or visit the more/wiki. and if you want to read into it, try this link (again, old texts in new technology:) Tao Te Ching translation with introduction, by Stan Rosenthal

Voices and Stories from Pakistan
The book i ordered especially for the global reading challengs is a mixed collection of stories from Pakistan. Pakistan indeed is a country i know almost nothing about, and the only images that come up in mind are those of tragic tv news: earthquakes, floodings, political turmoil. 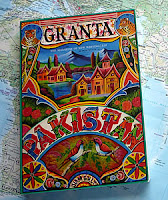 The Granta collection is a carefully edited, multi-facet read, it includes stories and essay, poetry and photography. And the cheerful, colorful cover itself gives the read a different tune, even though some of the stories are painful and tragic. But it also includes an amazing story about the mountains of Pakistan: "Ice, Mating" by Uzma Aslam Khan, about creating a glacier:


"After five winters, the ice blocks - one male, one female - would begin to creep downhill, growing into a natural glacier.. Only this side of the mountain attracted the right length of shadow for the snow to hold for ten months, 14.000 feet above sea level."

Who knew?
And again, reading brought back own travel memories: i remembered that while in India, i joined a desert tour with camels. And out there, if you would have kept walking for some days, you would have arrived in - Pakistan. Yes. No border there, in the desert. Here's a photo from back then: 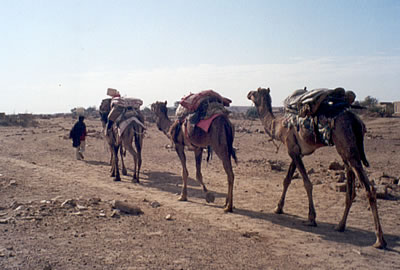 I also still remember the evening out there in the desert, our group gathered around a fire, and our guides singing traditional songs for us, then turning to pop, and then asking us to sing our songs for them... "Country Roads Take Me Home" then turned into the theme song of this tour.

Which (you guessed it) now leads to the story that fascinated me most in the Granta collection: "Pop Idols" by Kamila Shamsie. In a mere 14 pages, she tells so much about life in Pakistan, how it was to grow up there, and how national and international politics turned into one of the main themes for everyone:


Given the state of Pakistan today, it is impossible to remember the heady days at the end of 1988 without tasting ashes. Elation was in the air, and it had a soundtrack. At parties my friends and I continued to dance to the UK’s Top 40, but the songs that ensured everyone crowded on to the dance floor were ‘Dil Dil Pakistan’ and the election songs of both Benazir’s Pakistan People’s Party (PPP) and the Karachi-based Muhajir Qaumi Movement (MQM).

There was little concern for political affiliation. At one such party I recall a young Englishman looking perplexed as Karachi’s teens gyrated to a song with the chorus Jeay jeay jeay Bhutto Benazir (‘Long live Benazir’). ‘I can’t imagine a group of schoolkids in London dancing to a “Long Live Maggie” number,’ he said, and I pitied him and all the English teenagers for not knowing what it was like to see the dawn of democracy. ..

Only that this dawn of democracy never came to full bloom, she notes a bit later: "One of the most distinguishing features of the Bhutto government was the prevalence of the status quo precisely where there was the most urgent need for change. ... the great social transformation we had expected to see, that Return to Before, never happened."

When googling the story and her name, I arrived at a list of links: Kamila Shamsie is the author of five novels, and writes for the Guardian. She grew up in Karachi and now lives in London kamila shamsie  is a feature on the story, at NPR: Understanding Pakistan, By Way Of Its Pop Idols

And curious for the music, I arrived at this photo slide show about Pakistan, with the popular pop song playing while so many different images of Pakistans are shown. Here's the intro note for it: "The video highlights some aspects of Pakistani culture, architecture and landscapes. The famous song "Dil Dil Pakistan" by Vital Signs has somewhat become a secondary national anthem for Pakistan." (and the one who uploaded it, farkagal... happens to be living in Munich right now, down the Autobahn A8. small, big world.)

So the global reading challenge and this monday reading-meme now also induced a trip along memory lane, with some of my own travels included. And the Granta Pakistan anthology, it’s like a door to new authors and to unknown web-links. The good thing about the reading challenge and the connected posts is that both makes me look for interesting links and connected links that then lead to other books and links.

And so one of the next books i will read is Kamila Shamsie's novel "Burnt Shadows", which is a read that leads around the world: "Burnt Shadows is a story for our time ... Sweeping in its scope and mesmerizing in its evocation of time and place, this is a tale of love and war, of three generations, and three world-changing historic events... (leading) From Delhi, amid India's cry for independence from British colonial rule, to New York City in the immediate wake of 9/11, to the novel's astonishing climax in Afghanistan." (...which also happens leads back to the starting list of highest countries: "Nepal, China, Pakistan, India, Bhutan, Tajikistan, Afghanistan")

This blog post is inspired by the blog series "It's Monday! What are you reading?" which is hosted by Sheila at Book Journey. participating blogs are listed in this Linky Book List

The cover of the Pakistan book is absolutely gorgeous! I love reading about other lands and other cultures, you've got a great selection of books for that :)

Have a great week!

hi Jennifer! The cover of the Pakistan book, i'm still glad they made it so colorful and inviting, instead of grey and tragic. it sets a different tune for exploring the authors from there. Have a great week, too.

I really enjoyed your blog post, your books are most likely ones I'd not have picked up to read and I found your post extremely interesting, so much that I'm probably going to check into getting them through my library so thanks for that. I'm enjoying the lighter read with the Fireworks as I find my mind is still back in my last book so I need to look into the story of Masada more. I love when a book makes you go in search of the extra info. Have a good reading week.

You have had amazing travels.
Cheers from Cottage Country!

Ruth, that's just how i feel about reading: "I love when a book makes you go in search of the extra info."

thanks for visiting and glad you enjoy the reading notes.

Amazing Article, Thanks for sharing! Absolutely Pinned it! Thank you for providing so much valuable info for free. One of the most valuable piece of content on Filipina Journey. Keep up the great content.