World Reads, continued: short stories from the Caribbean + from Exile

The stories I read this week... were from many different place. Here's a photo that gives an idea, reaching from the Carribean to the Middle East and further, and including places that were "firsts" on my reading map. Like: Tobago. Or: Jamaica. 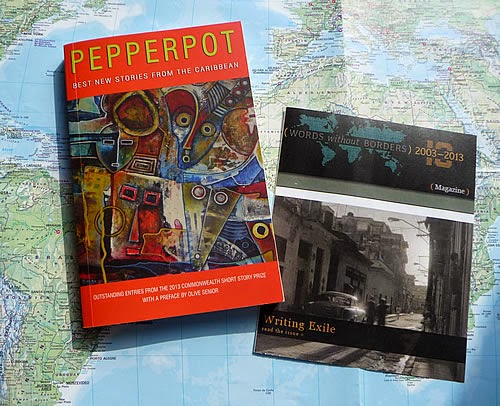 Pepperpot:  short stories from the Caribbean
So: Jamaica. And: Bahamas. First thing that comes to mind with those names is: long white beaches, ocean breeze, Sun. Reggae music. No real idea about the places themselves, though. It's great that the 2 publishers Akashic books and Peepal Tree Press teamed up and made this collection possible. It includes stories from:
No easy island reads, but some rather tough topics included. I guess to every place, there is an outside / touristic view, and the view of the people who actually live and work there. This collection takes you there, to this other side.

Story  links
The opening story is also online at Granta, and gives an idea of the different view the collection offers:

The Whale House by Sharon Millar, Trinidad and Tobago
"These offshore islands rise out of the water, rugged and black with deep crevices and craggy promontories. Her father used to tell the story of building the house. Dynamite under the water to blow a hole in the hill, a false plateau appearing like a shelf, the hill buckled up behind it."

And a second story link, from an online magazine that focuses on the Carribean, too,with a focus on poetry, but they also published some stories: Tongues of the ocean – stories

Here is one of them, one that stayed with me:

"Saving Rupa" by Lelawattee Manoo-Rahming, Trinidad
"Yesterday I decide I not running no more. I can’t manage with coming last again. Ever since that time when the boy hold down Rupa, it look like I use up all the speed Maha Devi give me for this life..." 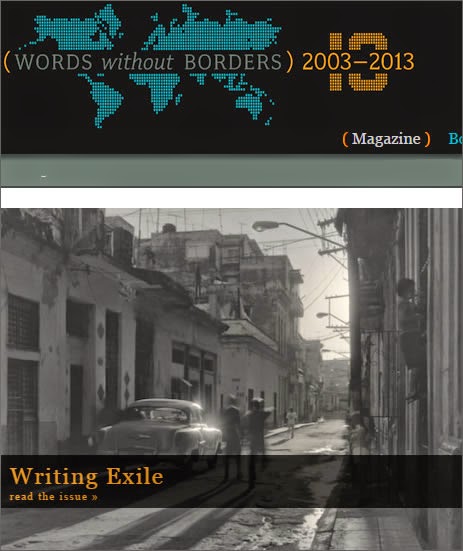 Writing Exile
Last week, the new issue of Words Without Borders went live. And it was such a good suprise. The theme of it is: "Writing Exile".Which connects almost perfectly with my recent reads and the blog post about them: "Reading from Chile to Paris to Romania with Gabriel Garcia Marquez, Milan Kundera & Herta Müller, or: home, exile, and fiction (blog post link)"

Here are some lines from the introduction to the Exile issue:

This month we present writing about and from exile. Although not all exiles flee political persecution or war, they have in common an involuntary departure forced by adverse circumstances. In fiction, poetry, and autobiography, writers explore the notions of departure and absence, memory and loss.

Reading it, it made me think that violence is a theme that runs through these days, too - and that exile often is a form of violence: being forced to leave your homeland.

The issue includes authors from Syria, Cuba, Uzbekistan and other places, here are some direct links:

Reading the world:  the collected list of stories is online here: global reading, and a note on the reading journey can be found here:  reading the (missing parts of) the world 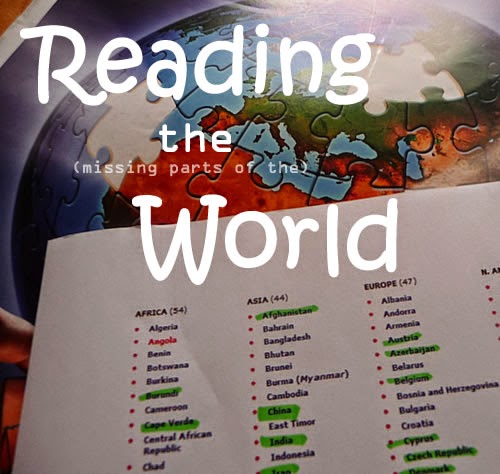 This sounds really cool. I love how in-depth you went. Thank you for sharing!

Thanks for your feedback, glad you enjoyed the reading notes and quotes. For me, blogging about books and stories is part of the process on reflecting on them, especially when they touch such huge topics.